A list of all characters appearing in Super Mario RPG.

Mario and his Party 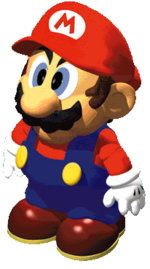 "Wow! You're THE Mario! I know all about you! You've got more JUMP in you than a box of frogs!"
— Mallow
*Jumps*
— Mario

The Hero of the Mushroom Kingdom leaps into action once again to save the world from the biggest threat he's ever faced with the same determination and courage he's used to take out Bowser countless times. He's the Jack of All Stats of the game and he specializes in jump and fire magic. 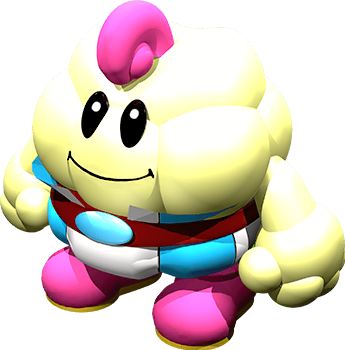 "I'm Mallow from Tadpole Pond. I’m a frog, but can you believe it? I can't jump. Embarrassing huh?"

A "tadpole" from Tadpole Pond who came to the Mushroom Kingdom on an errand and joined up with Mario to chase down a thief, and then to fight Mack. Upon returning home with Mario, he's told to his utter shock and horror that he isn't a tadpole, and his real family is out there somewhere. Thus he joins with Mario permanently to help save the world and find his real family. He's the resident Squishy Wizard who has lots of magical abilities deriving from the weather. 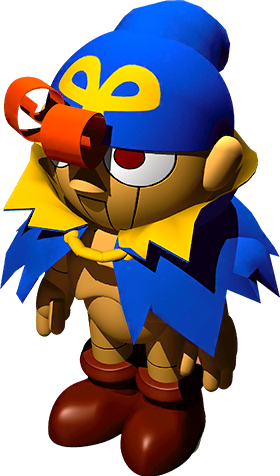 "I serve... a higher authority... that Star Piece belongs to everyone. You can't keep it."

A representative spirit from Star Road sent to find the Star Pieces, he takes up residence in the body of a doll and makes it grow to life size to use as a body. Initially acting alone, he recognizes Mario as a great hero and accepts his aid in the quest for the Stars. He's a reliable and trustworthy ally, and provides plenty of exposition.

"I'm gonna do something I may regret later...! But I'm gonna let you join the Koopa Troop. You can thank me later..."

The king of the Koopas, supreme leader of the Koopa Troop and Mario's archnemesis got booted out of his home when Exor crashed into it and the Smithy Gang took over Bowser's Keep. Alone and out of options, he allies with Mario for a chance to smash Smithy and get his castle back. He's primarily a physical attacker and Mighty Glacier. His magic is weak compared to Mallow's or Geno's, but can cause Status Effects.

The Princess of the Mushroom Kingdom has been kidnapped again, but before Mario can free her from Bowser's clutches, Exor crashes into the keep and sends Toadstool flying to parts unknown. After being found and saved and learning about Smithy and his cohorts, she isn't content to sit back and let Mario do the heroism this time, and comes along to help. She's the White Mage of the group, focusing on healing magic. 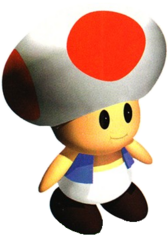 "Hey, you better watch out! He Knows About Timed Hits. He's gonna punch your lights out!"

The loyal retainer to the Mushroom crown, he pops up periodically to help Mario out with advice and items.

Worth noting: this is the only Mario game in which multiple Toads appear where an individual Toad character is singled out as the Toad. 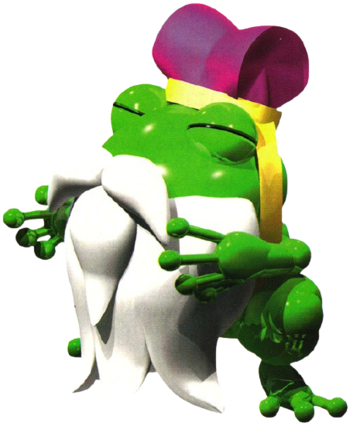 "Yes, come into my sanctuary and partake of my wisdom, children."

An old frog living in Tadpole Pond, he's Mallow's adoptive grandfather. He's known as something of an all-knowing sage, as the gossip of the world filters down its waterways to reach him. 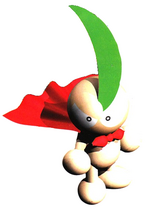 "I'll accept a challenge any day."

A master martial artist living in Monstro Town. He's found as the mentor to one of Bowser's old minions and will allow Mario to challenge him, giving up his title as master of the dojo if defeated three times.

A Shark Man pirate living in a sunken ship off the coast of Seaside Town, the fifth Star Piece fell into his realm. He becomes an ally to the group after recognizing Mario as a Worthy Opponent. 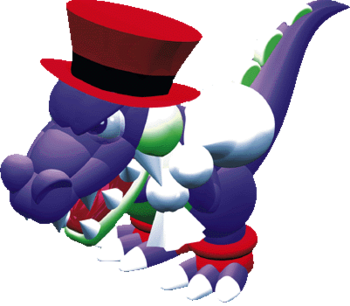 A crocodile thief who pops up routinely to swipe stuff from the party before fleeing to avoid a confrontation. 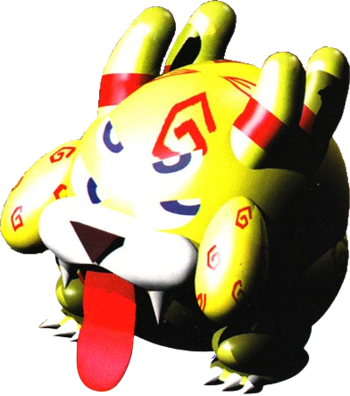 "Ooh! Room service has been kind to me! Where's my bib?"

A monster of ambiguous design who guards the Kero Sewers, he has a huge tongue and an appetite to match. 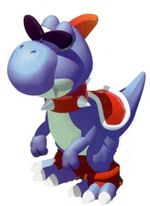 "What're YOU lookin' at? If you wanna challenge me, you have to bring Cookies!"

A blue Yoshi on Yo'ster Isle, he's the current champion of the Mushroom Derby, so he sets the rules about competing. Unfortunately he only accepts one-on-one races, so the other Yoshis can't compete like they love to do until someone beats him.

A bomb-happy... thing lurking in the Moleville mines, he attacks Mario to try and get some recognition.

"Please, enjoy yourself! At your own risk, that is!"

A bizarre man living in a tower to the south, he lives a secluded life in a world of Snifits, trains, and Chain Chomps.

A giant squid that sank Jonathan Jones' ship and was locked in its treasure room. Mario and his party need to defeat it in order to enter the ship's lower half.

"Dodo! Do you hear me?! Get over here NOW! I need some help... entertaining Mario! So MOVE IT!! Come here NOW!"

A vain woman who locks up the King and Queen of Nimbus land and has her pet Dodo pose as Prince Mallow so she can rule using him as a Puppet King. 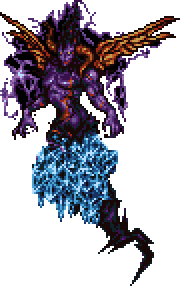 "Will you accept my challenge? You will enter combat against me?"

A mysterious being found in a dimensional rift in Monstro Town, he challenges Mario to a battle and attacks with four elemental Crystals. His entire scenario was completely rewritten

by Ted Woolsey beyond that. In the original Japanese, he is the "ruler of all evil" in his world who is concerned about an unfamiliar power Mario and his allies possess that he has never sensed before, and challenges them to see that power. In the English translation, he is a Dark Knight of Vanda sent by the Dark Mage, but as Mario's world is uninhabitable for him and his kind, he intends to depart home after a match with the world's strongest knight. 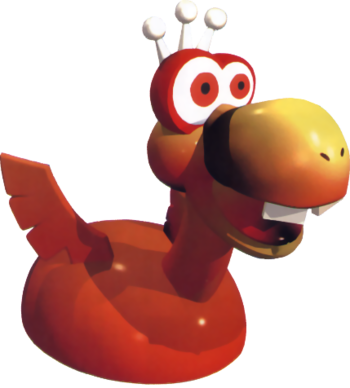 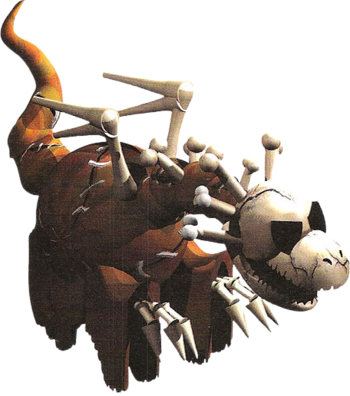 A dragon that guards the sixth Star Piece within Barrel Volcano. After being defeated, the Czar Dragon falls into a pit of lava and swiftly reemerges as the skeletal Zombone.

An evil organization of sentient weapons created and led by a being named Smithy, the Smithy Gang hails from an alternate dimension that Smithy has already conquered. Using Exor as a portal to cross worlds and Bowser's Keep as their forward base, they're now in the interests of conquering the Mushroom Kingdom for their own. They are the main antagonists of the game.
In General
Smithy 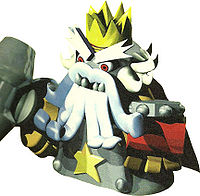 "Why don't you give me YOUR stars. Why, then I could easily conquer this world! Then we could get rid of all wishes, and create a world filled with... WEAPONS!!!"

The leader of the Smithy Gang and the primary antagonist of the game who wants to Take Over the World with an army of anthropomorphized weapons, he works from a dark factory in another world using Exor as a gateway into the Mushroom Kingdom.

"HALT! Who goes there? A trespasser!"

A giant sword that crashed into Bowser's castle and shattered the Star Road, its mouth acts as a gateway between the Mushroom Kingdom and Smithy's world. 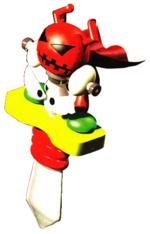 "Listen up, gang! These guys are gonna put a stop to OUR party! Are we happy about this?!"

A living knife, a lieutenant of the Smithy Gang, and the first high-ranking member of the group that Mario and company encounter, he and his army of Shysters invade the Mushroom Kingdom and turn the castle into their base while Mario is off tracking down Croco in Bandit's Way. 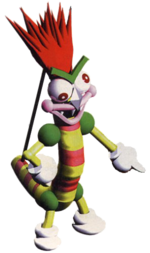 An animated giant bow and a lieutenant of the Smithy Gang who set up base in the Forest Maze, he terrorizes Rose Town by firing paralyzing arrows at the helpless citizens. 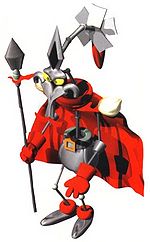 "I'm such a genius, it scares me sometimes. No wonder I'm so important!"

A spear-like being wielding a spear and a lieutenant of the Smithy Gang who splits into copies of Mushroom kingdom citizens and collectively poses as the citizens of Seaside Town to trick Mario into retrieving the next Star Piece for him. 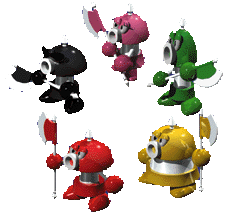 A group of ax-wielding warriors in the Smithy Gang commanding Smithy's airship, Blade, they attack Mario in Barrel Volcano to steal the sixth Star Piece from him.