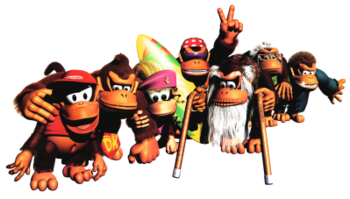 Donkey Kong and his merry band of primate friends and relatives, who frequently assist him in his adventures either as playable characters or through supporting roles. They're the main inhabitants of Donkey Kong Island.

open/close all folders
The Kongs in general
Advertisement:
Donkey Kong 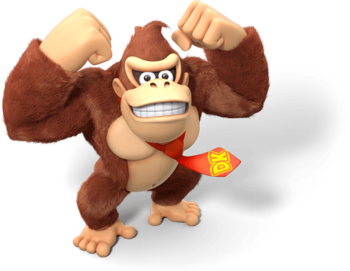 Donkey Kong ("DK" for short) is the grandson (or son) of Mario's original nemesis in the game that bore his name. He's a big hulking gorilla with a penchant for tossing barrels and eating bananas. He's been pushed out of Mario's #1 spot by Bowser (and gotten his own video game series), but has again challenged the plucky plumber in the Mario vs. Donkey Kong games. According to Donkey Kong Country, the original Arcade Donkey Kong was actually his grandfather (now named "Cranky Kong"), and while this was disputed for a time, later games reconfirmed this. 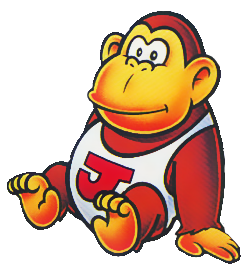 Junior is a mystery. He first appeared when Mario flew off the handle and locked up his father, the original Donkey Kong, rescuing DK and apparently setting Mario back on the straight-and-narrow. He popped up a handful of times after that, most notably in a kart race and tennis tournament, and then just fell off the map. Depending on whether Cranky Kong (the original DK) is the current DK's father or grandfather, then Donkey Kong Jr. could be the modern DK's father or even DK himself (except that they both appear in Mario Tennis...note And so do Mario and Baby Mario. DK Jr. was in because, at the time, Nintendo wasn't sure they could use Diddy, as he was owned by Rare. Don't look too deep into this.) 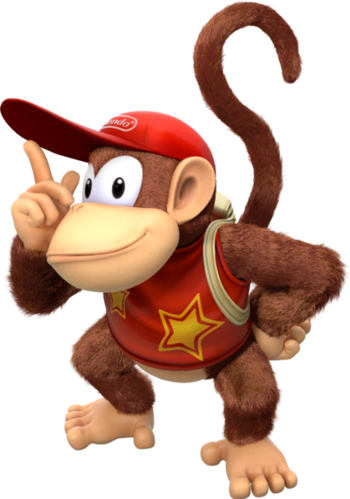 Donkey Kong's little buddy and sidekick, Diddy is a teenage monkey in a red baseball cap and tank top. Diddy is more carefree than DK and loves to play rap music and eat peanuts. He spends most of his time hanging out or having adventures with DK or his girlfriend, Dixie Kong. Diddy was introduced in Donkey Kong Country, but was integrated into Mario's extended cast in the Mario Sports games, starting with Mario Golf: Toadstool Tour. 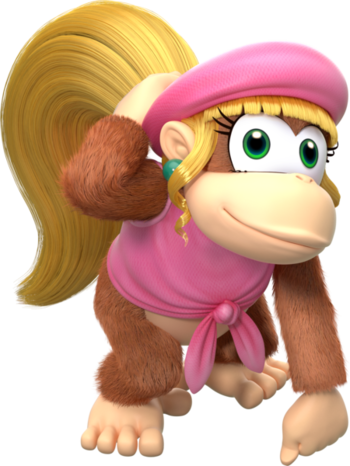 Diddy Kong's chimpanzee girlfriend, Dixie, is a hero in her own right. She helped Diddy rescue Donkey when the big ape was kidnapped by the Kremlings, then rescued Diddy himself when he befell the same fate. Dixie has long blonde hair that she wears in a huge ponytail, which she can use to spin helicopter-like over long distances and, inexplicably, pick up large objects. She can act childish at times, but makes up for it with her courage. Tiny Kong is Dixie's (bigger) little sister. 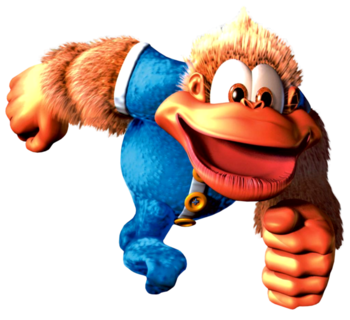 Kiddy Kong is Chunky Kong's baby brother and Dixie and Tiny's cousin. Although he's only a toddler, he's absolutely massive, roughly the same size as Donkey Kong himself. Kiddy accompanied Dixie when Donkey and Diddy were kidnapped in the Northern Kremisphere. Kiddy can roll onto bodies of water and skip like a rock two times consecutively. He cries and throws tantrums at times, but possesses the same natural courage as the rest of his family. 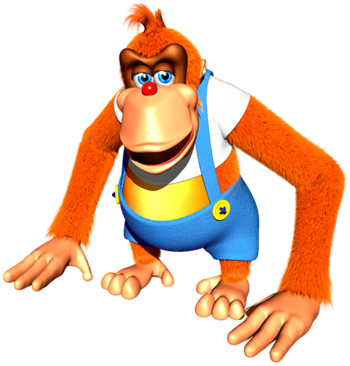 "A twisted twig on a distant branch of the family tree", Lanky is an eccentric oddball orangutan who hangs out with the other Kongs. He marches (or handstand-walks...) to the tune of his own trombone. Lanky's distinguishing characteristics are his goofy personality, his ridiculously long arms, and, of course, his funny face despite his lack of style and grace. He joined up with Donkey and Diddy during one of King K. Rool's invasions of DK Isles. 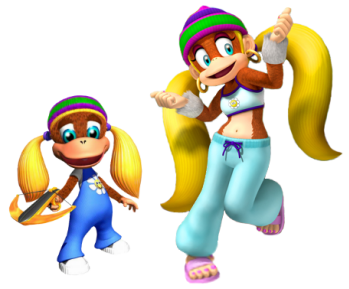 Dixie Kong's little sister (in age, not in height), Tiny Kong shares Dixie's speed, helicopter-like hair, and adventurous spirit. She's good friends with her cousin, Chunky Kong. After her first appearance, Tiny apparently hit puberty, as she is now much taller and more mature-looking than her big sister. 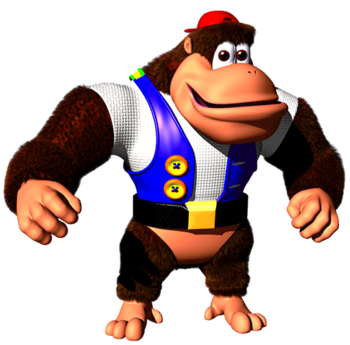 The biggest and strongest member of the Kong family, this gorilla is Dixie and Tiny's cousin and Kiddy's big (very big) brother. Chunky is big, strong, and tough, but has a very gentle personality and is very easily frightened. Like a true Kong, though, he always pulls through in the end. 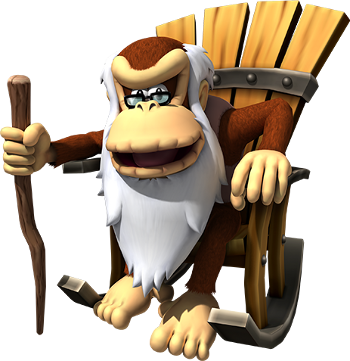 Donkey Kong's aptly named grandfather (or father, depending on who you ask). Cranky Kong spends his days sitting on his front porch, dispensing sarcastic advice to passersby, and bemoaning the loss of the good ol' days of 8-bit gaming. He was married to Wrinkly Kong before she gave up the ghost. According to Donkey Kong Country, Cranky was the original Donkey Kong who kidnapped Pauline and fought Mario. 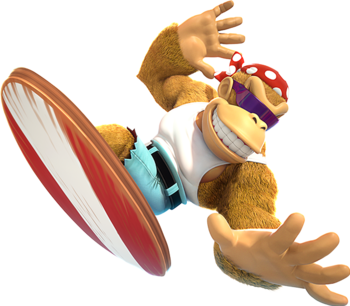 One of Donkey Kong's pals from DK Isle, Funky Kong hates leaving the safety of his garage, but gladly helps out Donkey and friends from the sidelines. He's a first-class gearhead who's invented a wide variety of vehicles and artillery to aid his friends, and often shows up at the last minute to throw a monkey wrench (pun intended) into King K. Rool's plans. When not at work, Funky loves surfing, drumming, and kart racing.

"How would you like a quick spin in my save barrel?"
Debut: Donkey Kong Country
Voiced by Mika Kanai (Japanese dub for animated series): Satsuki Tsuzumi (video games, 2007-present)

Donkey Kong's girlfriend — along with Swanky, one of the only two Kongs never to be a playable character. Candy provides a variety of services around the DK Isles, including running save points and minigames. 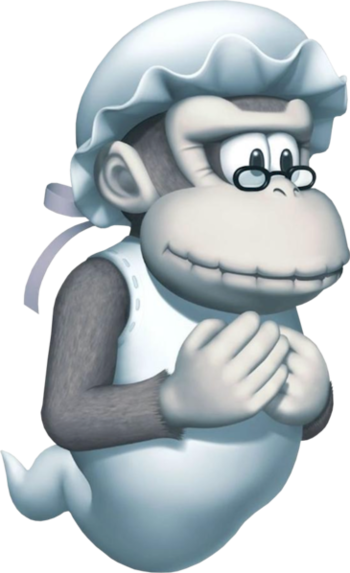 Cranky Kong's wife and Donkey Kong's grandmother (or mother?), Wrinkly used to run the Kong Kollege on Crocodile Isle, where she provided a haven and place of education for good Kremlings, as well as helpful tips for Diddy and Dixie on their quest to rescue Donkey. After the island sank, she retired to the Northern Kremisphere, where she spent her days enjoying her sunset years and caring for the local Banana Birds. Sadly, she died of old age not long after, but that didn't stop her from helping out the Kongs — she's now a ghost, and spends as much time with her family as ever. 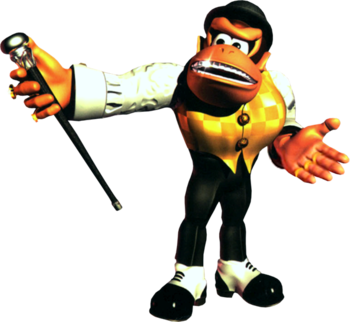 Would you buy a used car from this ape?
"Give them a big hand folks!"
Debut: Donkey Kong Country 2: Diddy's Kong Quest

A flashy show-ape with all kinds of expensive bling, a bad afro, and an unhealthy preoccupation with polyester, Swanky runs a variety of games and sideshows that give the other Kongs a chance to win some beaucoup cash and prizes. Like Candy (his occasional assistant), Swanky Kong has never been playable. Although he is a member of the Kong family, it is unknown if he is related to anyone in it. 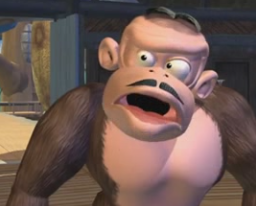 The boss of DK Island's barrel factory (owned by his mother), and Donkey Kong's rival for Candy's affections. Appeared in the Donkey Kong Country cartoon. 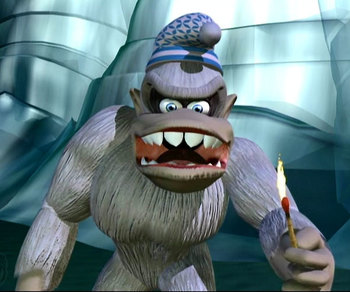 A white-furred Kong living up in the snowcapped White Mountains of the Donkey Kong Country cartoon. Armed with a big club and the distinction of being even dumber than DK, Eddie is a wild force in Kongo-Bongo Island. 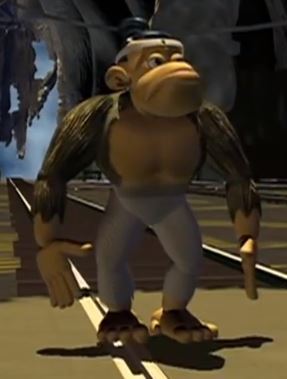 "I'm the kung fu master, so mean and tough! I'm so bad, I scare myself!"
Voiced by: Richard Newman (English)