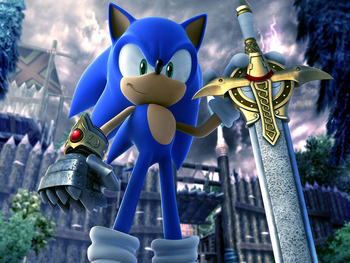 Camelot is about to get radical.
"Once upon a time, there was a little girl with an adorable red cape... and GREAT FLAMING EYEBROWS!"
— Aku, Samurai Jack
Advertisement:

A branch off the Formula-Breaking Episode tree, in which in the characters are cast into a "storybook land" in which there are chivalrous knights, beautiful maidens and, of course, dragons.

Such archetypes will be applied to each of the lead characters, their current situations and relationships in order to draw on familiar archetypes, but also to suggest a Happily Ever After Ending.

Note that these "Storybook" settings are incredibly generic. They are not adaptations of any previous material, just The Theme Park Version of fables and chivalry. If it is a straight adaptation of a specific fairy tale, then it falls under Fairy Tale Episode. If it is a parody or subverted version of a popular story, it's a Fractured Fairy Tale.

May or may not be a dream, as one character is often narrating. See also Trapped in TV Land.