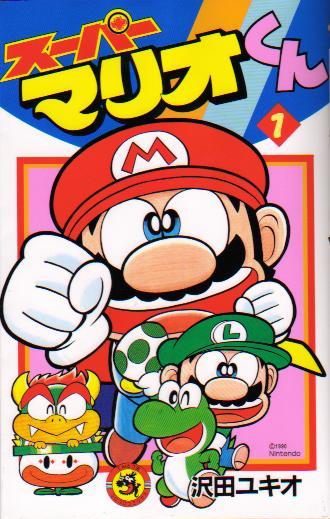 Super Mario Bros. Manga Mania (Super Mario-kun) is a long-running manga based off of Super Mario Bros.. It is written by Yukio Sawada, published by Shogakukan, and ran in CoroCoro Comic. In Japan, the manga is also available digitally on a Nintendo 3DS app.

The manga loosely adapts Super Mario Bros. games. It's a Gag Series manga with a focus on Slapstick and Vulgar Humor. Some chapters also feature puzzles to solve.

In 2014 it began localization in France as Super Mario: Manga Adventures and in 2016 it received a Spanish translation as Super Mario Aventuras. For its 25th anniversary, the manga's incarnation of Mario was made available as a downloadable costume in Super Mario Maker. It was the first time the character appeared in most countries.

that VIZ Media would localize a collection of select stories from the manga into in English, based on the Japanese Greatest Hits volume Super Mario-kun Selection. The collection was released in December 2020.