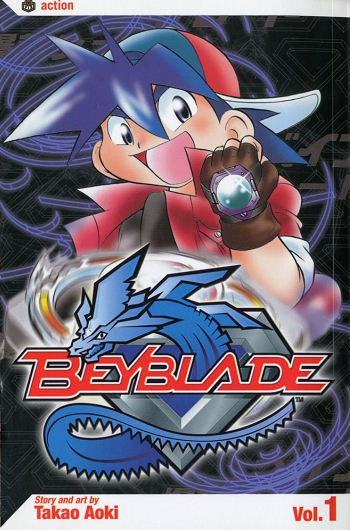 Don't rip this.
Although not the first media entry, the manga is the foundation of the Bakuten Shoot Beyblade (爆転シュートベイブレード)note "Bakuten" is a neologism, combining 爆 for "explosion" and 転 for "(rotational) movement". "Spinsplosion" works as a translation. portion of Beyblade. It was written and illustrated by Takao Aoki and serialized in CoroCoro Comic from 1999 to 2004. The manga was subsequently licensed twice for an English-language release, first in Australia, then in North America by Viz Media. In the the period 2016-2017, to celebrate the 15th Anniversary of the brand, a sequel series was created under the name Bakuten Shoot Beyblade: Rising, again written and illustrated by Takao Aoki.
Advertisement:

The manga can be divided in five components:

One important thing to note about the relationship between the manga and the anime is that they were in part produced concurrently and Aoki did do work for the anime too. This means that on occasion it's the manga which changed from the anime rather than the other way around. The most representative instance of this is Zeo's true identity, which was altered for the manga while the original idea made it into the anime.