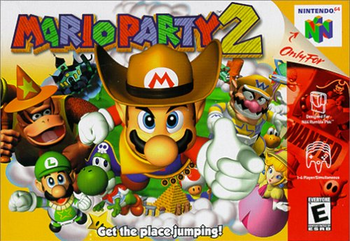 Mario Party 2 is a video game developed by Hudson Soft and published by Nintendo for the Nintendo 64 in 1999 in Japan and 2000 in western regions. It's the second installment of the Mario Party series.

Mario and the gang have created an entirely new land, but don't know what to call it. What starts as a friendly debate ends badly when Bowser chimes in and attempts to name the land after him, causing terror and tyranny as the means. Toad, who is neutral on the issue, proposes to everyone present that the name of the land should be determined by the one who manages to defeat Bowser in a party challenge. Everybody agrees, and the festivities begin.

Mario Party 2 retains many of the key features introduced in the first game, but with several changes and refinements to keep the formula fresh, and many such variations would end up being commonplace in subsequent games in the series. There are several new type of minigames: Battle minigames (in which characters contribute an equitable number of coins that is later rewarded to the winner and the runner-up), Item minigames (in which a solo player can win a board item), and Duel minigames (where two characters challenge each other, and whose winner takes all the money that is being dueled for). Characters no longer lose coins upon losing normal minigames, and it's now possible to practice a minigame before it's played officially. The biggest addition is items, which can be obtained via purchases at stores or won in the aforementioned Item minigames. Items can be used during the board segments to give the player some sort of advantage, such as granting an extra dice block or forcing a Duel minigame with the opponent of their choice.