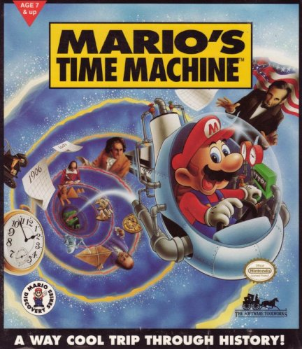 Mario's Time Machine is an educational game released for the PC in 1993 and Nintendo consoles later that year.

The premise is that Bowser has stolen valuable artifacts from throughout human history to display in a museum, and Mario infiltrates Bowser's castle to reclaim the artifacts and return them to their owners.

The game opens with players in Bowser's castle, and they can pick up one of five artifacts to return. After figuring out the time and place it was stolen from, players play a surfing minigame to time travel — assuming they set their coordinates properly, they will arrive at their destination, otherwise they return to Bowser's castle. The player must then fill out a fact sheet detailing the importance of the item and its owner, by filling in blanks in the document with dates, names, locations, etc. They can learn these facts by going around town and talking to people. Once the fact sheet is filled out, they can return it to its proper owner.

The NES game, despite an identical premise, plays out a bit differently. Mario rides Yoshi to Bowser's museum, and Bowser captures Yoshi when he runs inside alone. Mario explores the museum, where doors open to different time machines, and beats up Bowser's minions to reclaim an item they stole and then return it to its proper place. The player just has to physically return the item, no fact sheet necessary, though information blocks in the areas give you trivia about the time period.

Compare Mario Is Missing!, which has a similar educational premise involving geography.

This game was reviewed by The Angry Video Game Nerd in Episode 73 of his series.