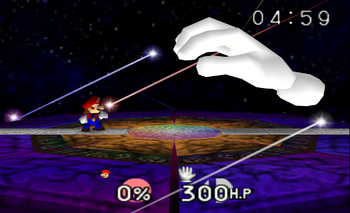 With sixteen note Super Mario Bros., Donkey Kong Country, The Legend of Zelda, Metroid, Yoshi's Island, Kirby, Star Fox, Pokémon, Mother, Fire Emblem, Kid Icarus, Pikmin, Animal Crossing, Xenoblade Chronicles, Splatoon, and ARMS other TV Tropes pages detailing the Nightmare Fuel in different Nintendo games, and eleven morenote Metal Gear, Sonic the Hedgehog, Mega Man, Street Fighter, Final Fantasy VII, Castlevania, Persona 5, Dragon Quest XI, Banjo-Kazooie, Minecraft, and Tekken (Bayonetta 2 has its own page, though its series does not) from third-party games, it's no surprise that if you put all of these series into one game series, there are bound to be a lot of frights. There are also entries in the main Video Game section detailing the horrors in other Nintendo games. So when you combine characters from all the recognizable Nintendo franchises in one fighting game series, it might be handy to take a few deep breaths before playing.

For examples related to specific games, see their respective sub-pages: