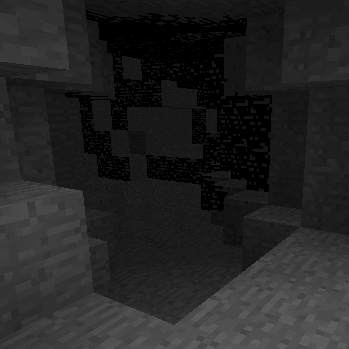 ...What's in the cave?
The underground tunnels of Minecraft have been compared to System Shock 2 due to their complete isolation, the darkness, and the mindless polygonal Body Horrors. And there's still more to it.note Fun(?) fact: One of the random splashes (those yellow text thingies) in the title screen says "Scary!" because some people think Minecraft is scary.

In order for Nightmare Fuel tabs to survive, a new writing style is going to be used, nicknamed Example Lobotomy. Basic rules: Just list facts as they are. Don't just say "character X" or "the X scene" (such zero context examples will be Zapped). Spoiler policy to be determined on a case-by-case basis. Italics to be applied to works' names only and not to give emphasis on what tropers say. "X scared me" is already implied by the mere addition of that example by the troper.

The World
Creatures and animals

The Endermen and The End
The Far Lands
The Nether
Sssssssss...*BOOM*