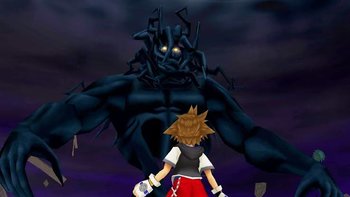 This is just one of the many Heartless in the game.note Keep in mind, this is just the first boss!
Ahh, Kingdom Hearts, you have it all: your own page for awesome moments, great soundtrack, a variety of hard bosses, and .... what's missing?
Advertisement:

Oh, a page for Nightmare Fuel.

What else did you expect from Disney and Square?