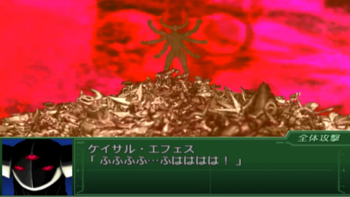 It's the End of the Galaxy, as the Satanic Archetype stands atop the destroyed remnants of The Heroes and their Humongous Mecha - just one of many possible Mind Rape visions, and he's laughing maniacally at it.
Advertisement:

Despite the multitude of Hot-Blooded positive heroes in Humongous Mecha, Super Robot Wars can sometimes do a couple of things that makes players feel slightly uncomfortable.