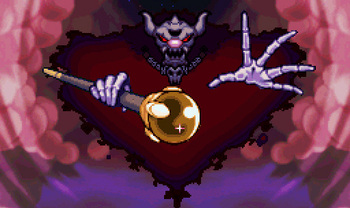 Pictured: Necrodeus, one of Kirby's most dangerous adversaries. His name translates to "Death God".
"You know, for such a cute franchise, Kirby's villains are pretty messed up."
— Joshscorcher on Kirby 64: The Crystal Shards, Top 50 Favorite Games Part 4

Kirby is cute, his world is cute, so clearly it's all just a Sugar Bowl where nothing scary ever happens, right? But in the depths of space, many creepy things exist.

Who knew a place called Dream Land could be so nightmarish?

Entries with their own pages:

In accordance with Spoiler Policy, Nightmare Fuel pages are Spoilers Off.

Kirby Mass Attack
Kirby's Return to Dream Land
Kirby Triple Deluxe
Advertisement:
Kirby Planet Robobot
Other games
Feel free to separate into more folders if a certain section gets big enough. Make sure to put a game example under its own section.