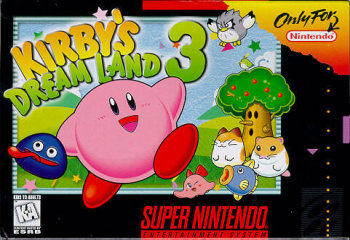 Kirby's back again, now with more friends than ever before.
Advertisement:

While Kirby of Dream Land is out on a fishing trip with his pal Gooey, they notice a black, cloud-like object ominously descending in the PopStar sky, scattering smaller, tentacle-like clouds throughout the land. Coo the owl rushes to inform Kirby that the planet is in big trouble, so he and his allies go to save the day once again.

Released in 1997, Kirby's Dream Land 3 is the SNES sequel to Kirby's Dream Land 2, and the second game in Shinichi Shimomura's "trilogy" arc of the Kirby series. Much like the previous game, there is a small number of Copy Abilities; the same seven abilities from Dream Land 2 plus the new Cleaning ability. These abilities are more oriented towards puzzle solving than combat.

A number of expansions have been made over its predecessor. First, borrowing from the helper system in Kirby Super Star, Gooey can be summoned either as a CPU-controlled helper or a P2-controlled character. Gooey can also copy abilities just like Kirby by capturing enemies with his tongue.

Returning from the previous game are the animal friends: Rick, who has gained the ability to Wall Jump and Goomba Stomp but has lost his Vacuum Mouth; Kine, who no longer hops slowly out of water; and Coo, who's undergone some slight movement tweaks and had some of his Copy Ability variants nerfed. Joining them are three new animal friends: Nago, a giant cat who can triple jump and Goomba Stomp just like Rick can; ChuChu, an octopus who can cling to ceilings; and Pitch, a bird who flies much like Kirby does. Like in Dream Land 2, using a Copy Ability while riding an animal friend creates a new attack. The biggest expansion over the original is that unlike there being an optional puzzle per level (world), there is an optional puzzle per stage. Replacing the Rainbow Drops as the optional collectable of the game opening the path to the True Final Boss are the Heart Stars. Each stage has a specific objective to complete for a heartbroken character in order to obtain their Heart Star.

This game was one of the last Nintendo-owned games to be released on the SNES, and the last first-party title released for the system in North America (a full year after the release of the Nintendo 64); as such, it stands as one of the best-looking games released for the system. It uses a unique pastel-drawn look not unlike the crayon aesthetic of Super Mario World 2: Yoshi's Island, but is enhanced by a special rendering filter that blends pixels together, a precursor to the High Definition filters used in emulation and modern releases of classic games today. Uniquely, it is also one of the few Kirby games to see an American release first; the Japanese version, Hoshi no Kirby 3, was released four months later.

This game was followed up by Kirby 64: The Crystal Shards, the final game in the Dark Matter Trilogy.