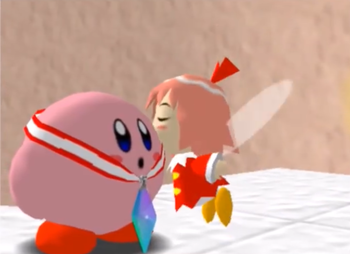 It's been twenty years, yet it feels like forever...
"So, Kirby saved the galaxy, and proved himself to be the greatest Star Warrior of all! And life in Dream Land went back to normal! But I suppose with Kirby around, life will always be an adventure!"
— Tiff, Kirby: Right Back at Ya!, "Fright to the Finish"
Advertisement:

It's a colorful series starring an adorable pink Waddling Head who, despite his powers, is one of the nicest guys in all of video games. Your hearts will melt from the heat when you see all these Heartwarming Moments.