Kirby Star Allies is literally all about making new friends. How can that be more adorable? 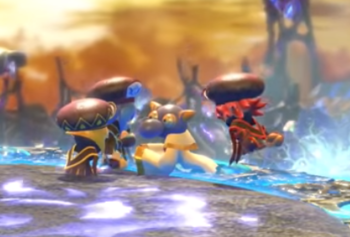 And all it took to get this complete ending to "Heroes in Another Dimension" was to endure those grueling puzzles and bosses to get 100 hearts. Totally worth it.
Advertisement:

You've edited this page with all Dream Friends, who are now heroes in their own right. You are the master of friends!