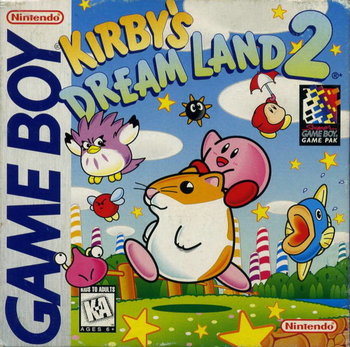 Kirby's back, and this time he has The Power of Friendship by his side.
"What are friends? Friends are there to pick you up when you're feeling a little down. Friends are there to rearrange someone's face when they're acting like a clown. Friends are a hamster, a fish, and an owl in Kirby's Dream Land 2. If you ain't fighting on their side... well, man, I pity you."
—USA commercial for the game

And so begins Kirby's Dream Land 2 (Hoshi no Kirby 2 in Japanese) for the Game Boy, the first game in a loose arc of the Kirby franchise which fans colloquially refer to as the "Dark Matter Trilogy" (the others being Kirby's Dream Land 3 and Kirby 64: The Crystal Shards). Directed by Shinichi Shimomura instead of series creator Masahiro Sakurai and released in 1995, the gameplay is mostly the same as the previous two games in the series, with Kirby still being able to run, jump, float, and inhale enemies to copy abilities if they have one. However, the number of abilities in this game are reduced from the great variety from Kirby's Adventure. To compensate, Dream Land 2 introduces a new mechanic: the animal friends. They are Rick the hamster, who can't fly, but runs fast and is unaffected by ice; Kine the fish, who can swim against water currents but hops slowly on land; and Coo the owl, who can fly against wind currents. The animal friends can be rescued from certain rooms, and using a Copy Ability while riding an animal friend creates a different attack. Rounding out the cast is Gooey, a friendly blob made from the same stuff as the main villain. Gooey only appears if you already have an animal friend that would be rescued otherwise (most of the time; rarely, either a girl named Chao (Japanese version) or a female Gooey (English version) will pop from the bag and act as a 1UP).

Also central to the game are the Rainbow Drops. There is one in each level (world) of the game, and each one is contained in a room that is very well hidden, requiring puzzle solving to obtain. While collecting the Rainbow Drops is optional, they are key to defeating the Big Bad, as collecting all seven of them allows access the True Final Boss against Dark Matter itself. This puzzle solving centered around ability use would become another staple of the trilogy.

The game was one of a select number of games enhanced by the SNES Super Game Boy peripheral, giving it unique per-area color palettes, a special border, and additional sound effects that made use of the SNES's sound chip to provide extra ambiance.