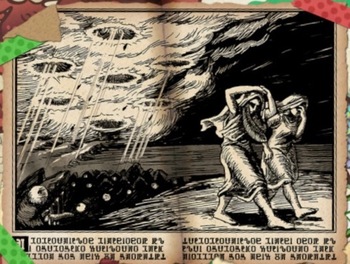 "When smoke rises from the seven rings, The [sic] pinkfish will emerge from the sea, devouring all the creatures of the land." -The Book of Madai, chapter 10, verse 10
"We actually have a phrase in Japan: "dark Nintendo" or "the dark side of Nintendo." It's something the players have said, but I remember Mr. Iwata saying it as well. It's not something that we're spending too much time [on,] trying to make sure our games are edgy and dark, but that we want them to be believable. We want them to feel like they have heft and weight to them."
— Hisashi Nogami
Advertisement:

You'd think that an absolutely adorable, colorful third-person shooter created by the family-friendly Nintendo wouldn't have that many terrifying moments... if you haven't been paying any attention whatsoever.