The final set of antagonists faced in of Persona 5.

Due to the nature of these characters, all spoilers for Persona 5 and Royal, as well as Persona 4 and Persona Q2 and Strikers will be unmarked. Read at your own risk. 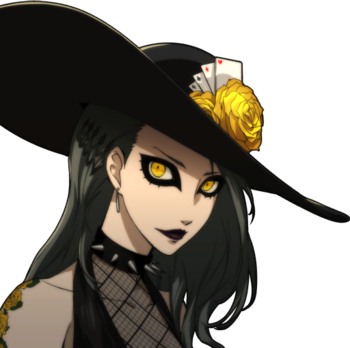 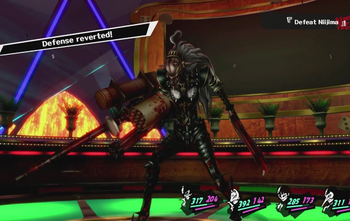 "Let's do this fair and square, shall we?"
"Justice cannot yield to evil! I must win, no matter what!"
Sin: Invidia (Envy)
Shadow: Leviathan
Voiced by: Yuko Kaida (JP), Elizabeth Maxwell (EN)

During the latter half of the Protagonist's interrogation, we learn that Sae Niijima herself is the Phantom Thieves' sixth major target. Leviathan, the demon of Envy, is Sae Niijima's Shadow, and she is in control of the casino Palace infiltrated at the start of the game. The palace and Leviathan are manifestations of both the extreme pressure put on her from her job and her feelings of inadequacy in comparison to her co-workers and younger sister.

The casino Palace is imposed on a Tokyo municipal courthouse, with the police station not far away. Sae's Treasure is the only one that is never explicitly shown, either in the Palace or out of it. Prior to its materialization, however, Makoto theorizes that Sae's real world Treasure is their father's notebook on investigations he's done, as his death in the line of duty is the major catalyst of her cynicism. Because leaving her Treasure alone is a major component of the thieves' plan to trick the conspiracy, Sae's Palace is the only one that is not destroyed in the game. 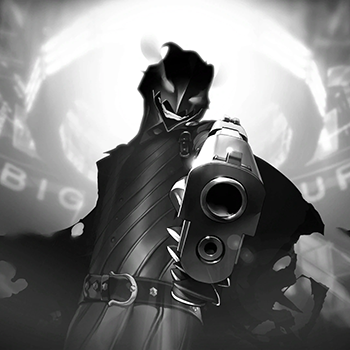 The True Culprit of the Mental Shutdown Incidents
"Now, let's see you drop dead one at a time, in front of your precious friends! DIIIIIIIIIE!!!!!"
Sin: Cavum (Emptiness)
A mysterious Metaverse user who is responsible for causing mental shutdowns and psychotic breakdowns, first mentioned by Shadow Madarame as "the one with the black mask". He made his first full appearance by killing Shadow Okumura after the Phantom Thieves succeeded in stealing his treasure.

It is later revealed that the masked man is none other than Goro Akechi, who sold out the Protagonist at the end of the casino heist, and it is only due to some creative thinking on the Thieves' part that they discover his true colors. When he is encountered in Masayoshi Shido's palace, he reveals that he is Shido's bastard son, driven entirely by his desire to demolish Shido completely. He informed the police of the Phantom's location in an attempt to pin the accidents and deaths he caused on the Phantom Thieves as a part of his plan to set Shido up for unopposed inauguration, in which he would take the oppurtunity to discredit him and ferment social unrest.

The Endgame reveals that Akechi and the Protagonist were chosen to partake in a thought experiment by Yaldabaoth to determine what course humanity's future would take. Akechi was chosen to represent "rebirth" - that is, wiping society's slate clean and building it up from scratch. While Akechi himself wants to teach society a lesson by causing his father's downfall in this fashion, Yaldabaoth's true plans are far more sinister.

Like the Protagonist, Akechi possesses the power of the Wild Card, allowing him to wield multiple Personas. However, as the Wild Card is only effective when the wielder forms many bonds with others, his misanthropic nature leaves him with only Robin Hood and his true persona — Loki, the god of mischief and lies in Norse Mythology.

For tropes pertaining to him, see his Character page here.

The People of Tokyo

Apathetic Legion of Regression
"What are you doing to our Grail?!"
Sin: Acedia (Sloth)

The general populace of the city of Tokyo, whose hearts have collectively created the massive Palace, Mementos. This Palace is a manifestation of the people's Sloth, due to their unwillingness to challenge authority in general or take responsibility for selfish decisions. As a result, the Phantom Thieves often come here to change the hearts of people who have yet to establish a personal Palace. Their treasure is the Holy Grail, a.k.a. Yaldabaoth. 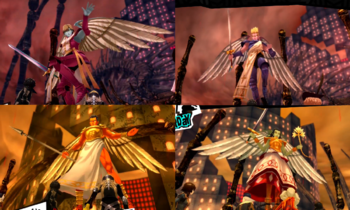 The Holy Grail's Four Heralds that appear on the Day of Reckoning in the Qliphoth World, acting as the Elite Four before facing off against the Final Boss. Players familiar with the Mainline SMT series will recognize them as the 4 Archangels that serve the forces of Law under Satan and YHVH.

More Information about them Series-Wide in the Shin Megami Tensei Forces of Law page. 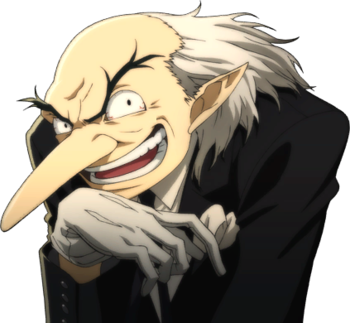 The God of Control
The Holy Grail 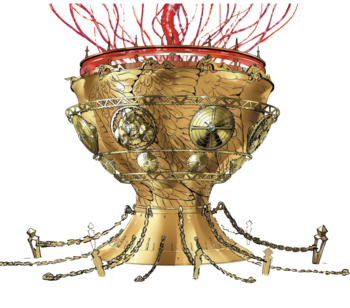 Treasure of Mementos
His True Form 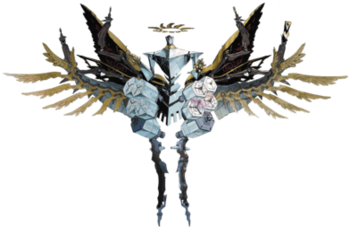 The Demiurge
"The game isn't over yet. Whether the human world is left as is, or destroyed and rebuilt, it is all sport to me."
Sin: All
Arcana: 0. Le Mat (The Fool)
Voiced by: Masane Tsukayama (JP), David Lodge (EN), Keith Silverstein (EN, Persona 5 The Animation)

The Eldritch Abomination behind the creation of the Palaces, representing the collective desire for order regardless of cost. Prior to the game's start, he invaded the Velvet Room and imprisoned Igor before splitting the current ruler of power, Lavenza, in half to erase her memories. He then deliberately sets up the most despicable of men possible into power, rigs the public into worshiping them and manipulates Joker and Goro Akechi throughout the game, pitting them against each other to help him discern the desires of humanity. The one remaining would dismantle the conspiracy he set up and "win" his game. In reality, it does not matter if the protagonist or Akechi "won" his game, he will simply remove the winner out of existence and use it to justify his totalitarian rule because humans are too stupid to think for themselves.

In Gnosticism, Yaldabaoth, a variant of the Demiurge, is an entity unable to perceive other expressions of the divine, leading him to believe he is the supreme deity of the universe. In an attempt to create order from the perceived chaos of the cosmos, Yaldabaoth chained the soul and heart in mortal forms, and punishes those who refuse to adhere to his rule. In some traditions, Yaldabaoth is eventually cast into the Gnostic equivalent of Hell, where he becomes the judge and torturer of wicked souls. This is different from the Platonic Demiurge seen in Devil Summoner, Strange Journey Redux, Shin Megami Tensei IV, Shin Megami Tensei IV: Apocalypse and Persona 5 Strikers, as the Gnostic Demiurge/Yaldabaoth is exclusively considered as malevolent, much like the Yaldabaoth from Shin Megami Tensei: NINE or the classic YHVH which are also based on the same Gnostic Yaldabaoth as this one. It should also be noted that the aforementioned games with the Platonic Demiurge explicitly names the entity as the "Demiurge".

The Dreamer
See The Dreamer's page here
The Creator of Wisdom 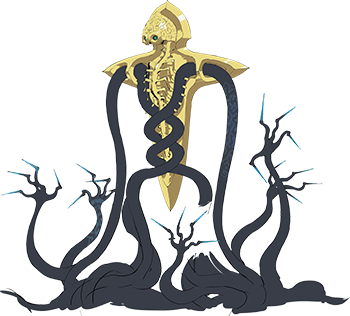 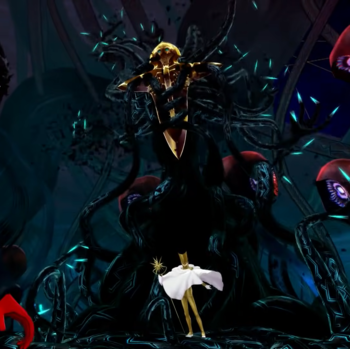 Ain Soph Ohr
"This power is the source...and the destination. I will be the light that guides mankind."
The creator of wisdom who acts as Maruki's Persona. Its initial form is Azathoth, the mindless, formless, blind idiot god of ultimate chaos who rules over the dreamlands in the Cthulhu Mythos. It is later evolved into its true form Adam Kadmon, the Kabbalahistic concept of the pure, unbound potential of the human soul, often associated with the crown of the Sephirot.

It is also possible that Azathoth might be a corruption of the "Azoth," the ultimate universal life force and the cure to all in Alchemy, which Azathoth envisions itself as, and in some sense of word, it is truly a "cure for all suffering." Azoth also motivates people towards physical and spiritual perfection, which Azathoth violates by giving them perfection and causing them to ironically become imperfect.

Another interesting point is that Azathoth and Adam Kadmon can be considered Lovecraftian and Kabbalistic versions of the Demiurge. Further, Azathoth and Maruki's plans mirror the initial conception of the Gnostic Demiurge, who imprisoned Adam and Eve in the Garden of Eden so they could be happy, but in the process left them equally deluded and ignorant to the fact he is not the one true god. This is in opposition to the previous Big Bad, Yaldabaoth, who mirrors the modern Gnostic interpretation of the Demiurge, where he simply wished to oppress humanity.
Advertisement: