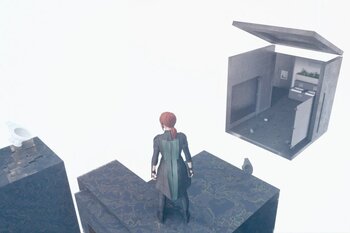 The Astral Plane creates some issues with the plumbing.
Advertisement:

A Reality Bleed is where one version of reality is gradually overwritten by another. Unlike when we go Down the Rabbit Hole, the alternate reality comes to us and begins to infringe on the real world.

This is similar to Or Was It a Dream?, but isn't isolated to a specific item or person. Instead, all of reality is up for grabs. If it is caused by a specific individual, they are an extremely powerful Reality Warper. In a time travel story, it would be a symptom of the Delayed Ripple Effect.

This generally begins a little at a time — an anachronistic lamp or the wrong face on a coin — but it gets worse until the process is stopped or it completely supplants the original reality.

This can either be an example of the protagonist going insane, or he could be the only one who realizes that something is very, very wrong. In some examples, everyone is aware of the changes, usually resulting in mass panic.

Due to the questionable reality inherent in the presentation of this trope, often the world being changed wasn't real to begin with. Sometimes it's even the real world which infringes on the false reality.

See also Layered World and Merged Reality, when the result is a mix of both realities. Compare Crashing Dreams, which is when reality infringes on a dream or daydream.