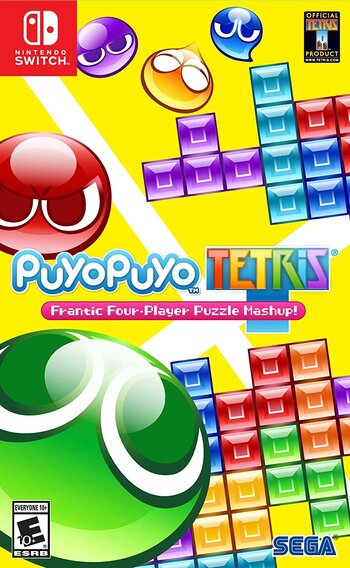 The two longest-running Falling Blocks franchises meet at last.
Puyo Puyo Tetris is a crossover Falling Blocks puzzle game developed by Sonic Team and published by Sega. The first high-definition Puyo Puyo game, it initially released for the Nintendo 3DS, Wii U, Play Station Vita, and PlayStation 3 in Japan, followed by an Updated Re-release for the PlayStation 4 and Xbox One in Japan. Three years later, it became the first Puyo Puyo game in more than a decade to be localized outside of Asia, releasing worldwide for the PS4 and the Nintendo Switch, followed by a worldwide port to Steam.
Advertisement:

As the name implies, it mixes the gameplay, characters, and storytelling of the Puyo Puyo series of competitive puzzle games with the gameplay of the Tetris franchise. Coincidentally, Sega had a significant hand in the history of both: Sega developed the 1988 arcade version of Tetris that put arcade puzzle games on the map, while Sega assisted Compile with the 1992 arcade version of Puyo Puyo and acquired the franchise in the wake of Compile's financial troubles.

Puyo Puyo protagonists Ringo, Arle, and Amitie find themselves engaged in more interdimensional madness surrounding the Puyos. This time, Ringo's world is flooded with Tetriminos; the trio is then warped aboard the Starship Tetra, a spacecraft from another universe where Tetris is the puzzle game of choice. The crew of the Starship Tetra, led by Tee, teams with Ringo and her friends to investigate the flooding of Puyo and Tetriminos in a journey that takes them to the end of spacetime.