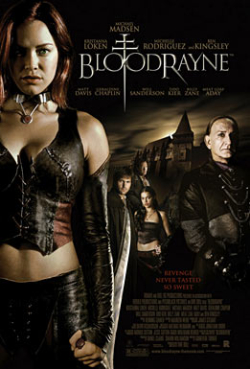 Based on the game of a same name, BloodRayne is the third video game movie by Uwe Boll, released in 2005, starring Kristanna Loken, Michelle Rodriguez, Michael Madsen, and Ben Kingsley. The screenplay was written by Guinevere Turner.

A pseudo-Prequel to the games, the film centers around the Dhampyr Rayne seeking to bring down her vampire father, Kagan. Instead of centering around killing Nazis, the first film is set around the Middle Ages and features a more laid back Rayne compared to her video game counterpart. But after all, Uwe Boll made this film and his faithfulness to source material has always been lacking.

Bloodrayne pretty much became the first franchise of films by Uwe Boll, as there are two sequels, BloodRayne II: Deliverance and BloodRayne: The Third Reich, and a fourth film is in development, rumored to be set in modern times.