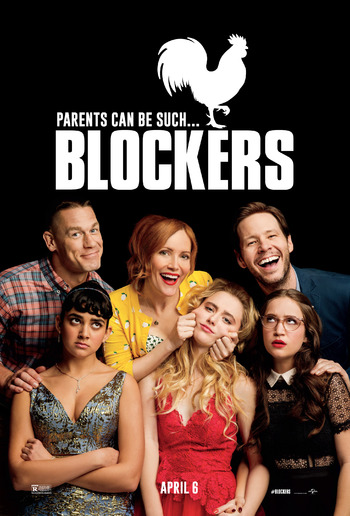 You only block the ones you love.
"Let's cockblock these motherfuckers."
— Lisa
Advertisement:

Blockers is a 2018 Sex Comedy by Kay Cannon in her directorial debut. It stars Leslie Mann (Lisa), John Cena (Mitchell), and Ike Barinholtz (Hunter) as the three main parents and Kathryn Newton (Julie), Geraldine Viswanathan (Kayla), and Gideon Adlon (Sam) as the girls.

Julie, Kayla and Sam are a trio of 18-year-olds who have been friends since elementary school. On the day of their prom Julie announces to the others that she intends to lose her virginity to her boyfriend that night. The three of them agree to a sex pact - that all three will have sex with their prom dates. However on the night their respective parents Lisa, Mitchell and Hunter find an emoji-riddled discussion of the pact on Julie's open laptop and agree to stop the girls before it's too late. So begins a night of wacky misadventures that will change how all six view themselves and each other.