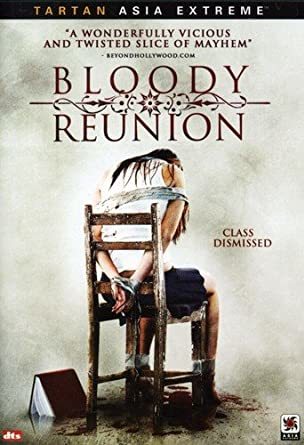 Bloody Reunion (aka To Sir, with Love, My Teacher or Teacher's Mercy) is a 2006 South Korean horror film, and the feature film debut of director Im Dae-Woong.

Mrs Park is a former elementary school teacher, who is in poor health and confined to a wheel chair, cared for by one of her ex-students, Nam Mi-Ja. Mi-Ja invites some of her old classmates to a (bloody) reunion in order to try and cheer Mrs Park up. However one by one the classmates are brutally murdered by a killer who covers her/his features with a handmade rabbit mask. Only Mrs Park and Mi-Ja survive the reunion, and Mi-Ja informs the Police that murderer is Mrs Park’s deformed son, Young-min, who was forced to wear a rabbit mask to cover up his facial deformity by his mother and kept caged in the basement. But is she telling the truth? And why is she the only student to survive?