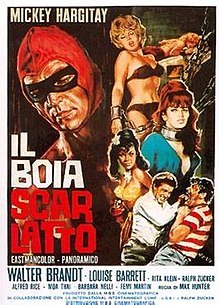 He was a homicidal maniac who LIVED TO KILL!
Advertisement:

Centuries ago, a madman known as the Crimson Executioner tortured innocents to death in his castle, where he was eventually executed with his own iron maiden. In the modern day, a group of models has arrived at the castle for a horror-themed photoshoot, not knowing that a former actor lives there. This actor sees himself as the Executioner's successor, and proceeds to torture and murder his way through the models.