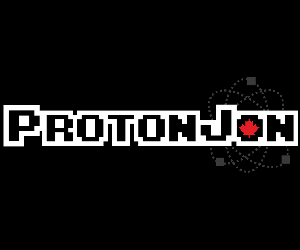 Moving faster than Pokey since 2007.
"FOR THE LOVE OF BATMAN, JUMP! BILL COSBY! IS ANGRY! STIMPY! I NEED SPACKLE!"
— Proton Jon, suffering for his art
Advertisement:

(real name: Jonathan Carlton Wheeler) is a Canadian Let's Player, game collector, and Twitch streamer, part of the original group of Video Let's Players from Something Awful. Like most of them, he created a YouTube account to host the videos he made. One day, he posted a two

LP of a level from Kaizo Mario World. It became a huge hit, and one of the seminal LP videos on YouTube, eventually leading to him becoming a YouTube Partner on October 18, 2010.

Many LPers, some of whom have become quite popular in their own right, list him as an inspiration. Depending on both when a video he's done was made and whatever's happening in the game he's playing, his commentary style can alternate between wry, witty commentary and hysterical, profane, and incomprehensible rambling, sometimes in the same sentence. Many of his unique turns of phrase have gone viral, sometimes to his chagrin.

His most popular videos are his Super Mario World romhack LPs and his posts of Super Smash Bros. Brawl matches with his friends, both of which are on indefinite hiatus, especially the former, due to having become burned out on Mario World romhacks as a whole. He is perhaps more infamously known for his long-running Let's Play of Superman 64, a playthrough that, between the quality of the game in question, the significant amount of research and editing that goes into each episode, and real-life events surrounding the LP itself, such as a person Jon was trying to buy equipment from straight-up dying...yeah, it's no wonder Jon himself considers this LP cursed. Although still incomplete after 10 years, Jon does still plan to finish it... eventually.

In addition to his Let's Plays, he also did an occasional brief review series called "You Should Play/Avoid This", starting with Brothers: A Tale of Two Sons.

As of the mid-2010s, Jon has made streaming on his Twitch page

his main source of content, with Let's Plays and other YouTube videos on the side. Signature among the varying types of streams he does are "Game Clearing" streams, where he attempts to beat as many of the unfinished games in his MASSIVE collection as he can, and various types of "Fortune Cookie" streams, where Jon rolls a set number of randomly-selected games (usually 5, with additional options added by whomever is commentating with him), and then puts up a poll to see which one the stream audience wants to see him play.

These streams have led to some...interesting in-jokes, such as a full-blown multiverse of "Alt-Jons" and other miscellaneous characters large enough to warrant a dedicated fanwiki, which can be found here

. Also affiliated with the stream is an Image Booru for stream fan-art, which can be perused here

. You can also view a spreadsheet of most, if not all, of the games Jon has streamed here

, and the many, many games in Jon's game collection here.

, where all of his streams will (eventually) be uploaded. Currently, barring any issues on Jon's end, newer streams are generally uploaded to this channel roughly a day after they initially went live.

Along with Chuggaaconroy and NintendoCapriSun, he is also part of a collaborative LP group known as The Runaway Guys. Jon occasionally does dedicated streams with the Guys (and the occasional guest) on his Twitch whenever the trio meet up to record footage, and as of 2018, the group hosts an annual live charity marathon on Jon's Twitch called The Runaway Guys Colosseum. Tropes related to these streams generally belong on the Guys' page.

As of May 2021, Jon is also a member of the re-refreshed NormalBoots

(work page here.), and The Disc Only Podcast

(work page here.), an inside joke taken way too far that generally airs live via Jon's Twitch page the first Tuesday of each month, in which Jon, Tom Fawkes, Stephen Georg, and The 8-Bit Drummer discuss everything from things that have happened in their personal lives to the South of the Border

As of 2018, he's married to Lucahjin; the two have also done a few Let's Plays together for her channel, stretching back to around when the two were dating- see Lucah's page for tropes related to those.

As of March 2021, Proton Jon has SIX LPs completely recorded and are planned to be released on a regular schedule. More details here.