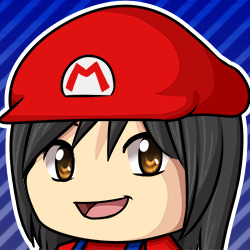 is a Let's Player on YouTube. She's known for her quirky commentary and cute demeanor, with a bit of derp on the side. She's also a talented artist, and does most, if not all, of the art on her channel and videos herself.

In addition to her own content, she occasionally appears alongside other LPers, like The Runaway Guys and StephenPlays. She is also one of the Let's Players featured in the Phenomena-Fanclub's film

of who they wanted to be an extra or to be the character Millian.

, where she uploads Twitch VODs of her playing co-op games with her boyfriend, BrettUltimus.

Tropes that apply to MasaeAnela: