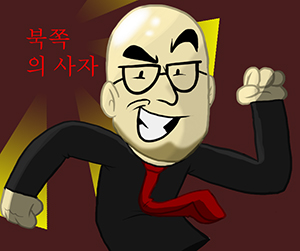 Northernlion (real name Ryan Letourneau) is a Let's Player, hailing from Canada. His channel is host primarily to various Let's Play series (the most prolific being the over one thousand episodes total of The Binding of Isaac and its expansion and remake, as well as group play-throughs of various Paradox Interactive games), the Let's Look At series (a one-time look at a new game providing his thoughts on it) and The Northernlion Live Super Show (see below). His wife, Kate, along with a cast of regular guests, often make appearances in his videos and streams. His videos can be found on his YouTube channel here

and his streams can be watched live here

He hosted a Machinima series named Poison Mushroom which featured him riffing on various objectively terrible games and ran for two seasons. Originally, his channel was host to a podcast named Saving Progress, featuring himself, JSmithOTI and Michael AL Fox, but this ended after 17 episodes late 2012, though Fox reportedly wants to bring it back at some point.

Since February 2013 (although the show took a few months to evolve to its now-usual format), he has hosted a thrice-weekly three-hour livestream on Twitch with his co-host Nick, a.k.a. RockLeeSmile

and initially with Josh (JSmithOTI) (until he became an occasional guest due to real-life business) named The Northernlion Live Super Show, or the NLSS. The show has a build-up of continuity and in-jokes and often features a wide plethora of their friends as guests.

In 2015, a fortnightly podcast crowdfunded via Patreon was started featuring Ryan and Nick along with MathasGames (or Mat Has Games) and BaerTaffy named the Roundtable Podcast. It now airs on Twitch every Friday as Roundtable Live.

Be sure to check out the Quotes and Funny Moments pages.

Northernlion and his commentary provides examples of:

If you enjoyed the article, please click the like button; it helps out a great deal; and of course, subscribe if you wanna see more in the future; but for now, thanks for watching, and I'll see you next time!