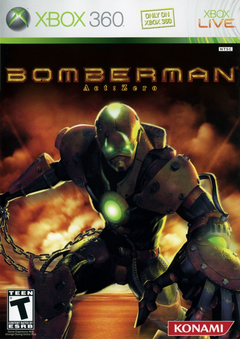 Bomberman Act:Zero is a 2006 reboot of the Bomberman franchise for the Xbox 360, loosely based on the 1985 Famicom/NES Bomberman game's story and box art while retaining the franchise's core gameplay.

Bombermen are destructive Artificial Human Weapons born in an underground facility to prove their worth by destroying each other: whoever comes out alive wins. The player's Bomberman (or Bomberwoman) is awakened and thrown into battle, planning to fight its way to the surface to escape.

The game has 99 levels with no save options, one life, and no continues. The game also introduces First Person Bomber, which places the camera behind the player (which is technically a Third Person View). There are no other gameplay changes in this mode besides a Life Meter, and multiplayer is online-only.