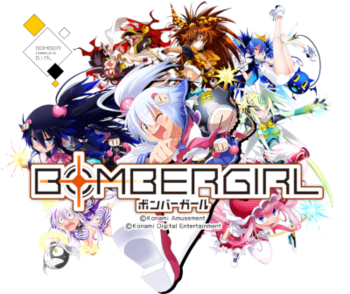 Ever wondered "What if Bomberman became a MOBA game, and instead of cartoony robot characters, featured an assortment of cute and sexy girls à la Otomedius?" If so, then Bombergirl is the answer you've been waiting for.
Advertisement:

Bombergirl is a spin-off game in the Bomberman series, it was developed by Konami and released on August 30, 2018 for the e-Amusmement arcade system. It is a MOBA-styled take on the classic Bomberman gameplay where 8 players split into two 4-player teams take control of the titular Bombergirls and battle against each other as they race against the clock to take over their opponent's towers and destroy their base. There are four types of Bombergirls among the game's roster: Bombers, characters who specializes in planting many bombs; Attackers, melee-oriented fighters geared towards fighting the enemy's team; Shooters, who are similar to Attackers but utilizing long-ranged attacks instead, and Blockers, supportive characters who can assist allies and create obstructions. Each Bombergirl possesses unique stats and special skills they can use to fight against enemies or support allies if sufficient amounts of Team XP has been earned. Similarly to Otomedius, Bombergirl also features cameos and references to other Konami properties such as Castlevania, Tokimeki Memorial, BEMANI, TwinBee, and not least, Bomberman.

The plot of Bombergirl is rather sparse, however, some of the characterizations of the game's cast is handled through its Denser and Wackier comics published on the official Bombergirl twitter. Although its gameplay is simplified compared to other MOBA games, however, Bombergirl features a streamlined, arcade-styled approach to the genre on top of the Bomberman foundation. XP earned through collecting the Team XP power-ups and is shared among the entire team rather than individual players, being defeated by enemies (or stage hazards) causes the player to lose a stat power-up rather than losing character levels, and the game being designed for quick and simple skirmishes. The game also features a large variety of maps to play, some which of include unique level gimmicks and hazards similarly to the classic Bomberman games. Players can also dress-up the Bombergirls in various costumes and accessories, as well as change their chat voices and special skills with other ones (if available) from the Locker Room. After each match, players can pull various items such as costumes, extra skills, and unlockable characters through the Bomber Gacha; if the player receives an item they already own, it rewards CP instead, which can be spent through the in-game shop in the Locker Room.

Also, and whenever a player is defeated, they're treated to seeing their character's clothes blown to shreds while they wait to respawn. Bombergirl is that kind of a game.

The game itself, however, has never been released outside of Japan. Despite its limited availability, Bombergirl has gained a cult following and it has also received updates over the years, adding new maps, extra characters, and unique events, one of which featured a collaboration crossover with Quiz Magic Academy. The game also spawned a number of merchandise, ranging from keychains, artwork tapestries, and figurines of the Bombergirls. The developers also has expressed in developing a PC version of the game and releasing it through the Konami Amusement Game Station service as a pay-per-play game. On January 5, 2021, an open-beta for the PC version was released and was planned to run through until January 12, however, it was pulled short due to server connection problems. The game was quietly launched only in Japanese, in December 2021.

, and the official Bombergirl twitter can be found here

for the comics and game announcements (Japanese).

Bombergirls explodes with trope examples of: