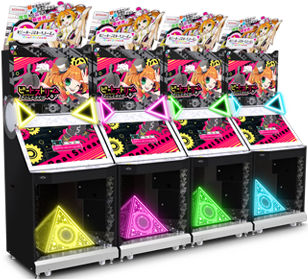 BeatStream (ヒートストリーム) was a 2014-2017 Rhythm Game for arcades in Japan developed and published by Konami, as part of their lineup of BEMANI games.
Advertisement:

The basic gameplay, which takes place on a touchscreen, is as follows: An octagonal target zone is shown at the center of the screen, and notes come from one of eight directions towards this area; the object is to hit these notes as close to the lines of the target zone as possible. While most of these notes must simply be tapped, there are also green notes that must be swiped across rather than merely tapped. There are additionally six circular targets around the screen arranged in a hexagonal pattern, and when notes appear in these targets, they must be hit in time with the visual cues. Lastly, there are "Stream" notes that can appear anywhere on the screen and must be dragged across in time.

The game is additionally known for its focus on unique videos for songs: In order to better showcase them, there is a second screen on the cabinet, positioned above the touchscreen, that shows off these videos unobstructed to spectators.

Sadly, this game was not too long for this world. In early 2017, Konami announced that service for BeatStream would be terminated after August 31, 2017; the game ran on Konami's eAMUSEMENT network and required an online connection to start the game up. Beginning in March of that year, arcades were given the option to convert BeatStream cabinets into ones for Nostalgia. Unlike Miraidagakki FutureTomTom and DanceEvolution Arcade (both also BEMANI games that are online-required), this game did not receive an offline-enabling kit, after August 31, the game was finally taken off of the eAMUSEMENT network after a little over three years of service, ensuring that it can never be played again.

BeatStream provides examples of the following: