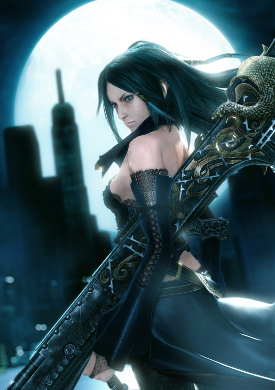 Bullet Witch is a 2007 Third-Person Shooter developed by Cavia and published by AQ Interactive (Japan), Atari (North America/Europe), Codemasters (Australia) for the Xbox 360 and by XSEED Games for PC.

Taking place in 2013, the story revolves around a supernatural event that occurred six years earlier and resulted in a large horde of demons (calling themselves the Geist) emerging and driving humanity to near-extinction.

In a coastal city in the U.S., a witch named Alicia arrives, driven by a disembodied voice called "The Darkness" that speaks to her. In her investigation of the city, she comes upon one of the last human military outposts and is asked by their commander to help save mankind. Using a magical broomstick that can change its shape and allow her to cast spells, Alicia sets out to rescue the surviving military forces in the city and confront the Tri-Serpent, a dangerous and magic-resistant demon.

The game was notable for allowing the player to summon various powerful spells, including lightning strikes, powerful tornado storms and meteor showers. The player's weapon could also transform into four different types of guns. Between each stage, players can spend Skill Points earned based on their performance to upgrade Alica's abilities and learn new spells. A PC port developed by Marvelous was released on April 25, 2018 through Steam and Humble Store featuring support for higher resolutions, improved frame-rate, rebalanced gameplay, and includes all of the game's DLCs for free (the extra missions however must be unlocked first).

Not to be confused with Bayonetta or Marisa Kirisame.