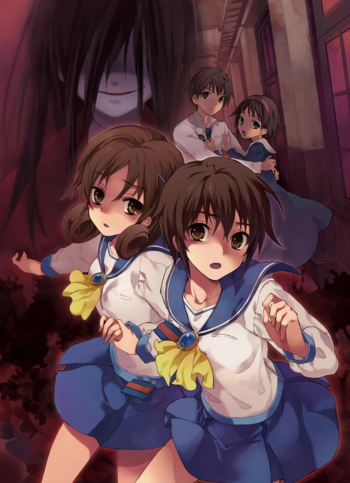 Years ago, a series of terrible incidents occurred at Heavenly Host Elementary.note 天神小学校 – Tenjin Shōgakkō Mysterious accidents, disappearances, and murders finally resulted in the school being closed and torn down. In its place, the high school Kisaragi Academy was eventually erected, and Heavenly Host became the stuff of bad memories and ghost stories…

Like the ones Ayumi loves to tell her classmates, much to Satoshi's dismay. No matter how much he tries to be brave, he still spooks easily… and his childhood friend Naomi's not much help either, giving him even greater grief whenever he gets frightened. Thanks to their teasing, Class 2-9's cleanup after their culture festival takes much longer than anyone else's, and they're all caught in their classroom when a strange earthquake hits, splitting the floor and separating everyone. The Corpse Party series follows Satoshi, Naomi, Ayumi, and the other students who find themselves impossibly trapped in the long-destroyed Heavenly Host Elementary and seeking to escape from the master of the school, Yoshikazu Yanagihori, and his army of malevolent spirits.

For two similar series, see Danganronpa and When They Cry.

Warning: Due to the nature of the plot, it might be best to experience the full series before going any further.