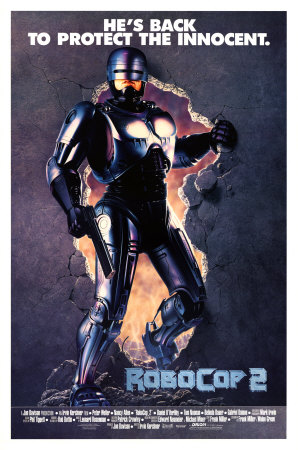 "Can't shoot a kid, can you, fucker?"
— Hob
Advertisement:

The plot involves the spread of a new drug called Nuke, considered the most addictive narcotic in history, as the police department is on strike. RoboCop struggles to stem the flow by going after Cain (Tom Noonan), a drug kingpin with a messiah complex.

Meanwhile, OCP has failed to replicate their success creating the first RoboCop. After several failed attempts, an unscrupulous OCP executive hypothesizes that the mind of a criminal with a strong desire for power and immortality could survive the procedure. When RoboCop finally takes Cain down, OCP immediately sticks Cain's brain in "RoboCop 2" and counts on his addiction to Nuke as a Restraining Bolt (you get no points for guessing how long he stays loyal). Now RoboCop must face his Evil Counterpart — who is far more heavily armed than himself.

Lewis: That son of a bitch is getting away with it. We can't even touch him.
RoboCop: Patience, Lewis. We're only human.
Feedback