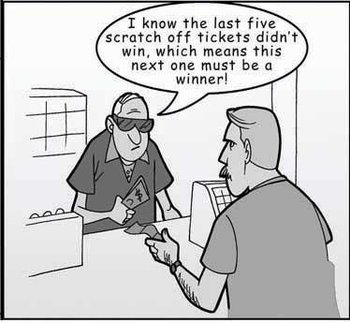 "I lost last time. This means that this time I am totally going to win."
— Engie-tan, Nerf NOW!!
Advertisement:

Believing that a random outcome is affected by previous outcomes, or believing that sequences of random events — such as rolling dice, flipping coins, drawing cards, and pulling slot machines — have memory. Basically, it's the idea that independent events will occur in "streaks". If a coin has just landed on heads four times in a row, surely it's much more likely to get tails this time, to even things out... or alternatively, heads is on a roll and will appear next time, too. See also Random Number God and Artistic License – Statistics.

Psychologically, this fallacy tends to come from the fact that the odds to replicate a pattern do go up cumulatively. The probability of rolling 20 on a d20 twice is 1/400, the same as any expected sequence of two numbers. The probability of rolling the first is 1/20, and the probability of rolling the second is also 1/20. The fallacy occurs when someone assumes that once they've rolled two 20s in a row, it's less likely than usual (< 1/20) that they'll get another 20. In reality, once they've rolled two 20s in a row, it's just as likely as ever (1/20) that they'll roll a 20 again. This also, most notably, works the other way around - if they've lost many bets in a row, they aren't any more likely to win the next bet. Psychologically, what you're doing is inventing desirable patterns that fit with the events you observe despite the patterns not really being there at all.

A similar misinterpretation is that if an event has a probability of 1-in-n, then you are guaranteed a success if you make n attempts. As an exaggerated example, the probability of a "heads" on an unbiased coin is 1/2, therefore, flipping a coin twice is guaranteed to get at least one "heads." This is not true.note This is sometimes called the fallacy of equipartition, as if there are n equally probable outcomes, this line of thinking suggests that if you run the procedure n times, you'll get every outcome exactly once each.

Another factor is that many people confuse "a number of independent events" (where any of a number of permutations will do) with "a series of independent events" (where only one permutation will do). If we flip a coin twice, we have a 50% chance of getting heads and tails in some order (heads-tails and tails-heads; the other two possibilities are heads-heads and tails-tails). But if we specify that we want the series to be "heads-tails", the probability that that particular series will come up is only 25% — the outcome tails-heads no longer fits the criteria. (Of course, any series has the same chance of coming up. You have as much chance of flipping heads-tails as you do tails-heads, heads-heads, or tails-tails; namely, 25%.)

Also, stuff really does even out over time. Just not in the way some people might think. Say that you have flipped a coin and you have had 4 heads and 1 tails come up. Heads has come up 80% of the time. Now, you get the "normal" (more common) sequence, where 5 heads and 5 tails come up, bringing a total of 9 heads and 6 tails. You then have only 60% heads, so while this is a smaller number, it didn't exactly "even out."

To explain the above in another way, flip a coin 10 times, and the chances that heads was flipped 4 times or more is 82.81%. Flip it 1000 times, and the chances heads was flipped 400 times or more is 99.99999999%. But even if it was less than 400, the next flip will still be 50/50: long-term odds predict the general trend of many results, not what will happen in a specific instance.note This is known in probability theory as the Law of Large Numbers, which says, for example, that the difference between the observed frequency of a perfectly fair coin landing heads up and the theoretical frequency of 1/2 becomes negligible in the long run, even if it isn't always zero. This is also the reason why playing a high number of low-stakes games in Casinos increases the chances of the house making money; the house advantage only affects who wins a small percentage of the time, but this advantage "evens out" over the long haul. Unless you're a good card counter, taking advantage of free stuff, or just enjoy playing, you're more likely to be successful with a small number of high-stakes events.

Note that Gambler's Fallacy applies only to systems that both have no memory, and are explicitly known to be fair. Drawing cards without replacement (read, deck now has "memory") does alter the probabilities of the next cards drawn, and if you do not explicitly know that the event being tested is fair, you can use things like n-heads-in-a-row to draw conclusions of bias in the system (see Non-examples and Theatre sections below).