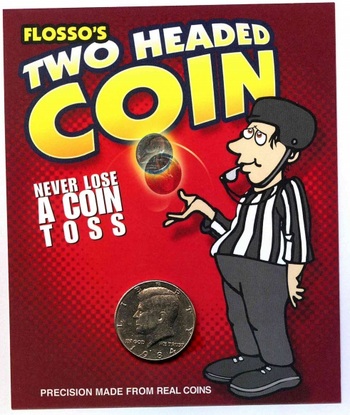 I make my own luck.
The two-sided mint is the rule, not exception,
And would you not feel quite the fool of deception
To find the same face on both sides of the coin?
— Drood
Advertisement:

A character flips a coin to make decisions, letting their fate be decided by chance... except that they've secretly provided a two-headed coin just to ensure that "fate" comes out in their favor.

A two-tailed coin is equally valid, but much less common, for whatever reason. Additionally, if a coin is being judged on the side that lands and not the symbol, a two-headed coin is actually more fair, as the weight of different designs actually biases normal coins.

Often a characteristic quirk, usually for villains, anti heroes, or badasses. May indicate a character is Two-Faced or appear as a #1 Dime. Can invoke Dramatic Irony when the audience knows the coin is rigged, but the other characters don't. When the coin isn't two-headed, it may still always land heads up due to the Random Number God or a character being Born Lucky. Subtrope of Fixing the Game. See also False Roulette for another type of game of chance that isn't actually up to luck and Heads, Tails, Edge for another coin-flipping trope.

Not even a double headed coin is immune to the omnipotent claws of the Reaper's Curse.

Not even a double headed coin is immune to the omnipotent claws of the Reaper's Curse.