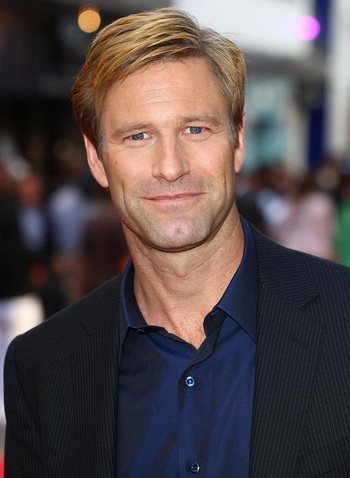 "You never really know as an actor; it's completely out of your control, in terms of editing, and music, and film stock, shot selection, and what takes they use."
Advertisement:

You either die a hero, or you live long enough to see yourself be described on TV Tropes.

He was born in Cupertino, California, but his family relocated to England in 1981, where he attended American Community School. At ACS he was first introduced to acting. In 1985 he moved to Sydney and attended American International School of Sydney for his high school senior year and further developed his acting skills in productions like Waiting for Godot. He left school during his senior year to take a job at the Warringah Mall movie theatre, and later earned his diploma through an adult education course. In 1988, Eckhart returned to the United States and enrolled in Brigham Young University-Hawaii as a film major, but later transferred to Brigham Young University in Utah ultimately graduating in 1994.

Eckhart's first professional role was in the film Godly Sorrow while he attended BYU. After graduation he moved to New York City, acquired an agent, and worked a number of odd jobs in between roles in television commercials. In 1994 he appeared as an extra on Beverly Hills, 90210, which he followed with roles in documentary re-enactments, made-for-television movies, and short-lived programs. In 1997 Eckhart starred in the film adaptation of In the Company of Men, followed by Your Friends & Neighbors (both directed by Neil LaBute) and Any Given Sunday the following year.

He gained wide exposure in 2000 as biker love-interest George in Erin Brockovich, followed by Nurse Betty in the same year and The Pledge in 2001. After this his film career faltered a bit with roles in lackluster films, but regained traction with Thank You for Smoking in 2006. Since then he has landed several major roles, including playing Harvey Dent in The Dark Knight.