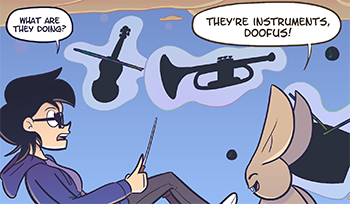 In the Soul World, Olivia's passion for music becomes actual, usable magic.
Olivia: I couldn't care less about whatever crises my classmates are going through.
Carl: Exactly! We chose you 'cuz it's ironic! Hahahahahaha!
— Carl explaining to Olivia why she was chosen
Advertisement:

is an Urban Fantasy Webcomic about a girl named Olivia who is chosen to help her fellow students deal with stress and anxiety, despite her hatred for other teenagers. She's chosen when a spirit named Carl suddenly appears out of her clarinet and demands that she clear her school of negative energy. She then does this by teleporting into worlds inside students' souls and defeating monsters that represent bad emotions.

She defeats them using the power of music of course.