Film / In the Company of Men 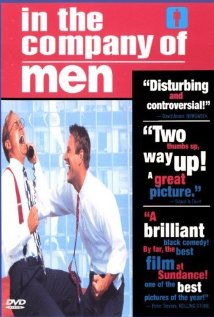 In the Company of Men is a cult 1997 independent black comedy/drama film written and directed by Neil La Bute and starring Aaron Eckhart and Matt Molloy.

It tells the story of two Jerkass co-workers, Chad (Eckhart) and Howard (Molloy), who have recently been dumped by their respective girlfriend and fiancée, seeking revenge against the female gender. So Chad cooks up a scheme that involves going out with and baiting an insecure young deaf coworker named Christine (Stacy Edwards), then breaking up with her and emotionally destroying her. Noted for its extremely realistic and casual portrayal of misogyny and its dark character study, the film received good reviews and won the Filmmakers Trophy at the Sundance Film Festival.

The film marked the first in a series of collaborations between LaBute and Eckhart, including LaBute's second film Your Friends & Neighbors.

Tropes used by this film include: