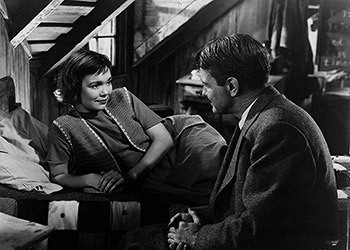 Dr. Robert Richardson (Ayres) has recently set up practice in a small fishing village on Cape Breton Island in Nova Scotia, Canada. His secretary Stella (Jan Sterling) takes a shine to him, but the doctor ignores her attentions. He is too busy taking an interest in the case of Belinda MacDonald (Wyman), a young deaf-mute woman who lives with her widowed father Black (Charles Bickford) and her spinster aunt Aggie (Agnes Moorehead). Dr. Richardson teaches Belinda how to read, how to read lips, and how to communicate with sign language. He then takes her to a specialist who delivers the sad news that Belinda's deafness can't be cured, as well as the very surprising news that Belinda is pregnant. The town gossips all assume that Dr. Richardson is the father, but the real father is Locky McCormick (Stephen McNally), a local fisherman who raped Belinda.

Adapted from a hit Broadway stage play of the same name, Johnny Belinda won Jane Wyman an Academy Award for Best Actress, in what was regarded as a surprising upset over Olivia de Havilland for The Snake Pit. Wyman became the first person to win an acting Oscar without uttering a word onscreen since Emil Jannings and Janet Gaynor won for Best Actor and Actress at the first Academy Awards in 1927. Wyman's Oscar is probably the earliest example of the tendency for Inspirationally Disadvantaged Oscar Bait performances to win the little gold statuette.