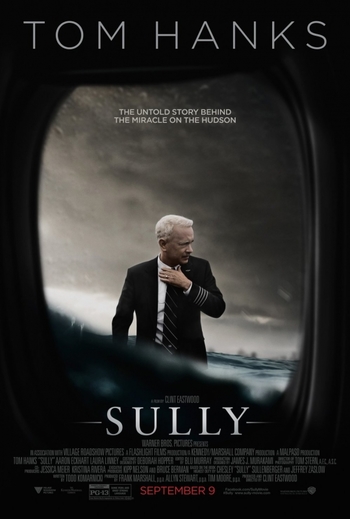 "This is the captain. Brace for impact."
— Captain Chesley Sullenberger
Advertisement:

and the emergency that occurred upon take-off from New York City's LaGuardia Airport on January 15, 2009, wherein they lost all engine power after hitting a flock of geese and had to make an emergency water landing in the Hudson River. Tom Hanks plays Captain Chesley Sullenberger (a.k.a. "Sully") and Aaron Eckhart plays his co-pilot Jeffrey Skiles. It is directed by Clint Eastwood. Screenwriter Todd Komarnicki adapted the story from Sullenberger's autobiography Highest Duty: My Search for What Really Matters.

The film spends time depicting the events surrounding the incident, with a particular note given towards the National Transportation Safety Board's investigation on if the water landing was absolutely necessary. Sully himself is confident in his skills and experience that it was his only option, but is concerned that the impartial investigation might find fault.