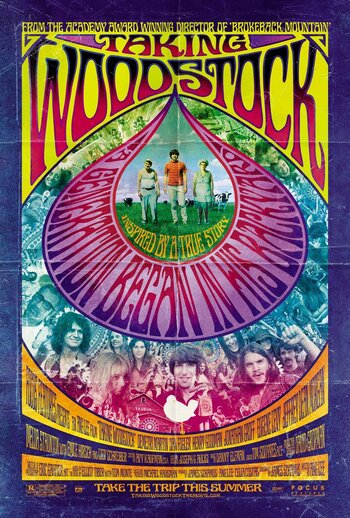 A 2009 comedy-drama film directed by Ang Lee, Taking Woodstock tells the story behind the creation of the titular music festival.

In 1969, young Elliot Tiber (Demetri Martin) returns to his parents' motel in the Catskills after a failed attempt at a career in art and design in New York City. His parents are in danger of losing their business and their home, so Elliot — the president of the local Chamber of Commerce — feels it's his duty to keep that from happening. Every year he gets a permit to host a local music festival, and 1969 is no different.

Well... there is one difference. See, in the summer of '69, one of the neighboring towns pulls its permits for a potential concert with the Woodstock Group. Elliot gets it into his head, seeing as how he already has the permit, to move the festival to his parent's motel in White Lake. Needless to say, Hilarity Ensues.