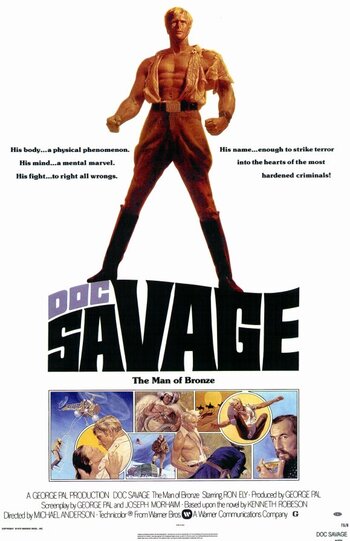 Doc Savage (played by Ron Ely of Tarzan fame, supported by a cast of relatively obscure character actors and the rather pneumatic Pamela Hensley) is a polymath: he's a physician, surgeon, scientist, adventurer, inventor, explorer, and researcher, trained from birth to have near superhuman strength and abilities. He has a "gang" of five associates (AKA the "Fabulous Five"), all of whom are utterly brilliant in their respective fields, from chemistry to engineering. They all served together in The Great War, rather like Biggles and his companions, if Biggles' crew had gone on to become science heroes after the war.

The film is distinctly camp and definitely does not take itself too seriously; just as well, as the story tends to telegraph exactly what comes next. It was created primarily to cash in on a resurgence in Doc's popularity that resulted from Dell republishing the series in paperback form in the late sixties and early seventies . (The poster is a Shout-Out to the Dell version's iconic James Bama "ripped shirt" covers.) Still, it's a reasonably enjoyable romp.

Long to short, Doc returns to his New York office from his Arctic Fortress of Solitude (which predated Superman's by more than two decades) having felt that something was wrong. It transpires that his father has died, leaving him a package of papers and tantalizing hints about the existence of a fabulous lost civilization high in the Andes.

Just as Doc is about to go through his father's papers, someone tries to kill him. Clearly, the assassin fails. Just as clearly, Doc must be on to something — otherwise, why try to stop him? So Doc gathers his confederates and they depart for an adventure in South America. Unsurprisingly, there follows the obligatory hunt for truth, justice and oodles of treasure, and the good guys prevail.

The film contains examples of these tropes: