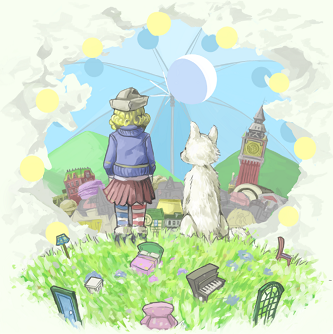 Hello!
Things are only as real as you make them.

Stray Ami is an audio production by Universeinthebox, with a Character Narrator of the protagonist, Blanc, the Imaginary Friend of a girl named Andale, who had recently moved into town and is very lonely. Blanc tells us of their day-to-day life from his unique perspective.

The distinctly French sounding music and references to 'A great metal tower in the center of town' seem to indicate that the story takes place in France, but whether or not this is true has never been confirmed by the writers - although Andale's father is stated to "come from America" and her mom speaks with a French accent. The time period is also unconfirmed, but might be somewhere in the past. Numerous little things indicate there has been a war recently.