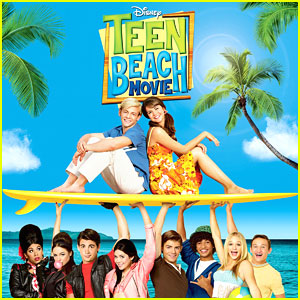 Teen Beach Movie is a Disney Channel Original Movie about a couple from 2013 who get sucked into a teen beach movie from 1962.

It starts with teen couple Mack (McKenzie) and Brady. They're surfers who live in a beach town. Mack lives with her grandpa who owns a surf shop, that is until her Aunt Antoinette comes to take her to a private school out East as a promise Mack made to her dead mother that she would be successful. Brady gets upset by this, as she didn't tell him the whole time they were together and she breaks up with him so they don't have the strain of separation. Mack is feeling regretful for having to leave and decides to surf one last time in the morning because of the unusually large waves.

As Mack surfs, the weather gets worse, and so do the waves. As Brady and Mack's grandpa watch her defy the lifeguards' red flags, Brady decides to go out to the water and take her in before she gets caught in the oncoming storm. Just as Brady gets to Mack, they are both swept under a wave that they struggle to escape from. When they finally reach the surface, they realize the storm is gone, along with other suspicious things. Once they check out what's happened, they find out they've landed in...

Brady's favorite movie, Wet Side Story; the 1962 teen beach movie about a pair of Star-Crossed Lovers from the rival groups of surfers and bikers rivaling over Local Hangout, Big Momma's. Unbeknownst to everyone but Mack and Brady, evil real estate developer, Les Camembert and mad scientist, Dr. Fusion, are planning to destroy the beach and Big Momma's to build a resort. Also, by accident, Mack and Brady make the leads fall in love with them instead of each other.

As the two try to figure out how to escape and set the plot right, they also teach the characters in the movie about independence and following your heart, and end up teaching themselves the same lessons.

On June 26, 2015 the sequel premiered, appropriately titled Teen Beach 2. This time Lela and Tanner somehow find themselves transported from the movie to the present time with Mack and Brady. The cast was also joined by I Didn't Do It's Piper Curda. Unlike the first movie, the sequel ended up vastly underperforming with a little over 4 million viewers - in the meantime, Disney Channel has decided to switch over to a new musical movie franchise, Descendants, that premiered about a month after Teen Beach 2.

All those tropes, and this thing never won an Oscar.