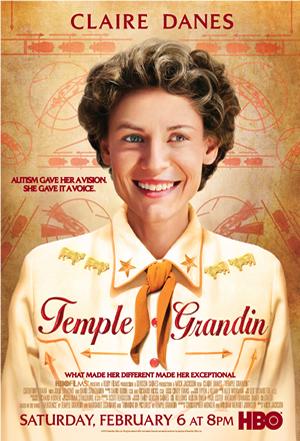 "Different... not less."
"Nature is cruel! But we don't have to be."
— Temple Grandin
Dr. Carlock: Can you bring everything you see into your mind?
Temple: Sure!... C-Can't you?
Advertisement:

A 2010 Biopic about doctor, professor and best-selling author Temple Grandin

(Claire Danes), who happens to be autistic.

The film covers the beginnings of Temple's life as a small girl in the 1950s, when her condition was classified as maternal neglect. Temple's mother, who knows this isn't true and does not want her daughter to be institutionalized, is able to teach Temple to talk, read and think like everyone else by the time she is only 4 years old.

When she graduates from high school, Temple lives at her aunt's ranch for the summer, where she becomes fascinated by the workings of the ranch and the cattle. She goes on to college, and a series of flashbacks shows how Temple got to where she was today, with the help of a high school science teacher who knew she could learn. Dr. Carlock helps Temple realize her abilities, and she learns that her autism helps her observe things in a way that she is able to use later in life to design a cattle dip, which almost every cattle ranch in America uses today.

The film is heartwarming, tear-jerking and beautiful, even so far that the real Temple Grandin thought it was a masterpiece. Temple Grandin was nominated for fifteen Emmy Awards and won seven, including the Primetime Emmy Awards for Outstanding Made for Television Movie and Outstanding Lead Actress in a Miniseries or a Movie.