Recap / Star Trek: The Next Generation S5E18 "Cause and Effect" 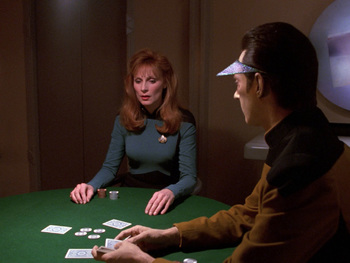 "Do you have the feeling that you've done this before?"
"All hands abandon ship! Repeat, all hands abandon—"
—Picard, saying something viewers will get used to hearing a few times.
Advertisement:

We begin this episode In Medias Res, with the Enterprise's engines on fire and the ship out of control. The bridge crew is frantically trying to steady the ship long enough to launch the lifeboats as Picard orders all hands to abandon ship. And just as the audience is thinking, "Like You Would Really Do It," they really do it: the Enterprise is blown apart in a huge space explosion, lost with all hands!

Then the opening credits roll.

Act I seems to be a How We Got Here, as we're re-introduced to the Enterprise entering an unexplored sector. We first look in on Riker, Data, Worf and Crusher engaging in their regular poker game. After much banter (and a win for Crusher, who calls Riker's bluff), Crusher is called to sickbay to help La Forge deal with a major dizzy spell—but she experiences a bit of Déjà Vu whilst treating him. Later that night, in her quarters, Crusher hears what seem to be a mass of disembodied voices and, in switching on the light, breaks a glass she'd left on the night stand.

Crusher reports her experiences to the rest of the senior staff, but is interrupted when sensors detect a Negative Space Wedgie nearby. As the bridge crew attempt to deal with the situation, the ship begins losing power and is unable to move—just as a starship emerges from the Space Wedgie on a direct collision course. With no power to the engines, Riker (standing at Data's side for no apparent reason) suggests decompressing the main shuttlebay to provide the necessary thrust to get out of the way, while Data counter-suggests using the tractor beam to push the other ship aside. Picard goes with Data's plan, which is not entirely successful: the other ship is deflected, but not by enough, and smashes the Enterprise's warp nacelle. This quickly causes a series of catastrophes, the events of the teaser play out before us again, and the Enterprise is destroyed.

Act II re-re-introduces us to the Enterprise entering an unexplored sector; it's at this point that savvy viewers will recognize the "Groundhog Day" Loop at play. Again we visit Riker, Data, Worf and Crusher playing poker, with much familiar banter. Crusher is about to win when Riker folds, realizing that she is going to call his bluff. Crusher is called to sickbay to help La Forge deal with a major dizzy spell, and again experiences déjà vu—only this time, La Forge feels it as well. Later that night Crusher again hears voices in her quarters and quickly calls the captain—breaking that glass once again.

The next morning Crusher reports her experience, relating that others aboard ship have also heard the voices. But before they can investigate, sensors detect a Negative Space Wedgie nearby. As the bridge crew attempt to deal with the situation, a starship emerges from the Wedgie on a direct collision course. As before, Riker stands at Data's station and suggests decompressing the main shuttlebay while Data votes for a tractor beam. Picard sides with Data, the collision occurs and the Enterprise blows up real good.

Act III. The Enterprise enters an unexplored sector. By this time, even the characters are starting to catch on, after a fashion; at their poker game, Worf recognizes their banter, and then he, Riker and Crusher correctly call out the hand Data is dealing even before he deals it. Data helpfully notes, "This is highly improbable."

In anticipation, Crusher calls sickbay asking after La Forge, only to be told he just walked in. This time, Crusher is examining La Forge's VISOR under Picard's supervision as they all discuss their recent déjà vu episodes. Crusher finds that some Techno Babble is affecting the VISOR, causing his dizziness.

Later that night, Crusher is ready for the disembodied voices; when they occur, she records them (she also moves the glass away from the light switch so she won't knock it over) and calls down to La Forge that she has something to report. He in turn tells her that another instance of that same Techno Babble just happened. As she rushes out to meet him, she knocks the glass off the table, breaking it yet again. In Engineering, La Forge and Data analyze Crusher's recording and discover that the voices belong to the crew of the Enterprise.

The next morning, Crusher and La Forge fill the others in on what they think is going on: a Negative Space Wedgie is going to entrap the Enterprise in a "Groundhog Day" Loop. They listen to parts of the recording which suggest the severity of the encounter's outcome, while trying to think of a way out. The problem is (unlike most instances of this trope) that if/when the Loop "loops," they all lose their memories of the previous loop, except for feelings of déjà vu. La Forge suggests rewiring Data's Applied Phlebotinum to mirror the previously established Techno Babble so that, if/when the Loop "loops," he can send a message into the next loop—albeit an extremely short one, one word at most, which will show up only as a sort of post-hypnotic suggestion so Data won't know initially what it means. The plan is carried out, and no one feels like they've tried this before, which is a good sign. Red Alert! Negative Space Wedgie! Ship on collision course! The tractor beam doesn't work! Enterprise explodes! Only this time Data manages to activate the Techno Babble message at the last second.

Back in that unexplored sector, back to the poker game. Worf experiences nIb'poH, and Crusher attempts to predict the hand that Data is about to deal. Instead, he deals all 3s, then three of a kind to each. Crusher is called to sickbay to help La Forge deal with a dizzy spell; she inspects his VISOR on a hunch and finds that it is being affected by Techno Babble. In Engineering, Data runs a diagnostic on ship's systems, and the results come up all 3s. They get a call from Crusher, telling them she's just recorded a mass of disembodied voices in her quarters — and they hear a glass shatter.

The next morning, they are reporting their findings: they seem to be stuck in a "Groundhog Day" Loop caused by an as-yet-unencountered Negative Space Wedgie. The Techno Babble which has been giving La Forge dizzy spells is also related to the Loop, and may be behind all the occurrences of the number 3 Data (and apparently the entire crew, it turns out) has been seeing. It is revealed that Data has been rewired to accept the Techno Babble, which seems to be a way to send short messages from one Loop into the next. As they ponder over what this could mean, they are called to the bridge to deal with a Negative Space Wedgie.

As before, the ship is without power and unable to move as another ship emerges from the Wedgie. Riker (standing at Data's side for no apparent reason) suggests decompressing the shuttlebay, but Data counter-suggests using the tractor beam to push the other ship clear. Picard sides with Data, but Data suddenly has a "Eureka!" Moment and goes with Riker's plan instead; the main shuttlebay decompresses, pushing the Enterprise clear and allowing the other ship to pass safely. The Negative Space Wedgie vanishes, power is restored, and the Enterprise crew greet the crew of the USS Bozeman (commanded by none other than Captain Frasier Crane), which was either stuck in the Loop for some 90 years or got teleported by the rift 90 years into the future. Data explains his "Eureka!" Moment: glancing at Riker, Data noted the number of rank pins on his collar (3) and deduced that the various phantom 3s referred to Riker, indicating that Riker's plan would be the successful one. Good thing he didn't think it referred to himself, since he is 3rd in command of the ship behind Riker and Picard.