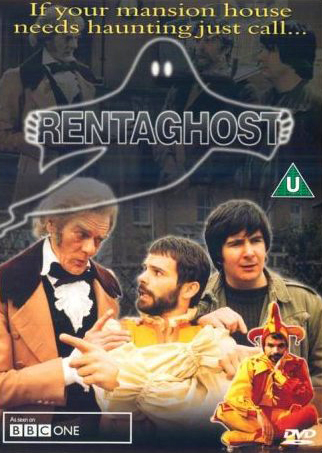 The original team of ghosts for hire: Hubert Davenport, Timothy Claypole and Fred Mumford.
If your mansion house needs haunting just call Rentaghost,
We've got spooks and ghouls and freaks and fools at Rentaghost,
Hear the Phantom of the Opera sing a haunting melody,
Remember what you see is not a mystery but Rentaghost!
The first verse of the Expository Theme Tune
Advertisement:

Rentaghost was a British children's television comedy show, broadcast by the BBC between 6 January 1976 and 6 November 1984. The show's plot centred on the antics of a number of ghosts who worked for a firm called Rentaghost, which rented out the ghosts for various tasks.

Rentaghost (the firm), located in South Ealing, is run by Fred Mumford, a recently deceased loser who feels he can find work for ghosts whose lives were as failed as his. His first (and only) recruits are Timothy Claypole, a mischievous jester with a comical lack of knowledge about modern technology; and Hubert Davenport, a delicate Victorian-era gentleman who is morally shocked by the modern world. The ghosts work from an office, which they rent from Harold Meaker, who discovers the truth about them in the third episode.

Over the course of several series, other characters were added: Hazel the McWitch, a Scottish witch; Nadia Popov, a Dutch ghost who suffers from hayfever and teleports away when she sneezes; Catastrophe Kate, a Wild West cowgirl ghost; and the pantomime horse Dobbin, who first appears in a one-off Christmas special called "Rentasanta" and is brought to life by Claypole, who is unable to cancel the spell afterwards – thus allowing Dobbin to remain in the show for the rest of the run.

Adam Painting, a local entrepreneur, frequently appears in episodes and tries, with limited success, to involve the ghosts in his latest business enterprise.

When actor Michael Darbyshire (who played the role of Davenport) died in 1979, Anthony Jackson (Mumford) declined to appear in the next series, leaving Michael Staniforth's Claypole the sole original ghost; Davenport and Mumford's absences were explained at the start of the series by them having acquired permanent haunting jobs at a stately home. After Mumford's departure, the business was taken over by a living couple, Harold Meaker and his wife Ethel (previously the owners of its offices), who suffered from the various problems the ghosts brought to their lives.

The long-suffering neighbours of Rentaghost are the Perkins, who think the Meakers are mad.