Life is a game that no one ever wins...
Unless they're willing to cheat... 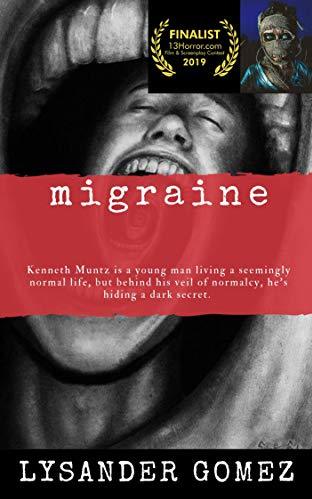 "Your pain is his profit."
Advertisement:

Migraine is a black comedy/horror screenplay written by Joe Blitz.

Kenneth Jason Muntz is a seemingly typical American young adult, fending off constant stress headaches and trying his hardest just to keep the lights on at his run-down apartment. Ken is a loner by choice, noted by his few acquaintances as an emotionally cold person, and while he projects an outwardly affable persona to his unwitting neighbors, he is hiding a dark, dark secret. And with the onslaught of winter approaching and his Cranky Landlord threatening eviction, Ken finds his Mask of Sanity slowly start to slip...

Conceived as a simple writing exercise, Migraine is the writer's attempt to show a day in the life of a cold-blooded sociopath, while providing only enough information for the reader to draw their own conclusions. It is also an examination of the lengths that the average person will go to to make money, and to show that no matter how sympathetic and understandable a Freudian Excuse may seem, once you leap down the rabbit hole, there's no turning back.

The screenplay was ranked as a finalist in 13Horror.com's 2019 short screenplay contest, and was published and available for purchase on Amazon as of June 19th, 2019. Joe Blitz, now going by Zander Del Noir, is currently preparing to film on No Budget.