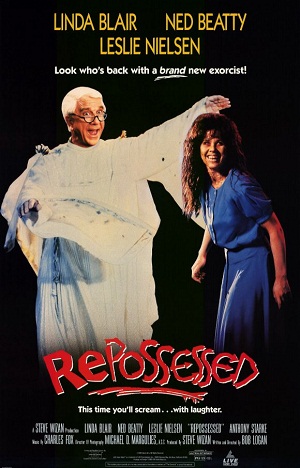 Repossessed is a 1990 comedy film spoofing The Exorcist.

Seventeen years after Nancy Aglet's (Linda Blair) exorcism, she has settled down with her family and Father Jedediah Mayii (Leslie Nielsen) has peacefully retired. However, one night while watching TV with the family, Nancy begins to slowly be possessed by Satan again. The (inept) Father Luke Brophy (Anthony Starke) is called in to see it for himself, when Satan manifests himself once again. Along the way, naturally, Hilarity Ensues. Especially in the form of a televangelist husband (Ned Beatty) and wife (Lana Schwab) who seek to televise Nancy's exorcism.

Has no direct relation to the 2008 novel of the same name, although it is also a comedy that involves demonic possession.