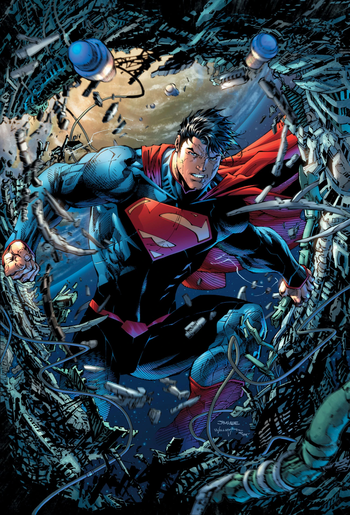 "Years ago, back when the world was on the brink of war, we sent a message into space. An equation that was more emotional than mathematical. An equation that added up to more than the sum of its partsÂ–nonsensical, but aspirational. An equation that called out, and said 'Help us be better'. We should never have turned to the stars for guidance. If there is an answer, it's here on Earth with us. For years, I thought Superman was trying to be the answer to that infernal equation. And I hated him for it. But I see now what his actions sayÂ–There is no answer. Figure it out yourself. How to be better. As he is trying to do... And perhaps, now, at the end, I can admit that in being the farthest thing from an answer to that equation... he might have been the closest we'll come to one."
— Lex Luthor, Superman Unchained #9
Advertisement:

A Superman miniseries taking place in the New 52 reboot written by Scott Snyder and illustrated by Jim Lee.

After stopping an attack by the cyber-terrorist group named Ascension, Superman discovers a military secret that had been safeguarded for at least 75 years: there has been another all-American alien superhero other than Superman. The alien is named William Randolph's Ace In the Hole (Wraith), and is presently assigned the duty of personally killing Superman if he ever stepped out of line. However, Superman and Wraith will have to put aside their differences and team up to fight against Ascension.